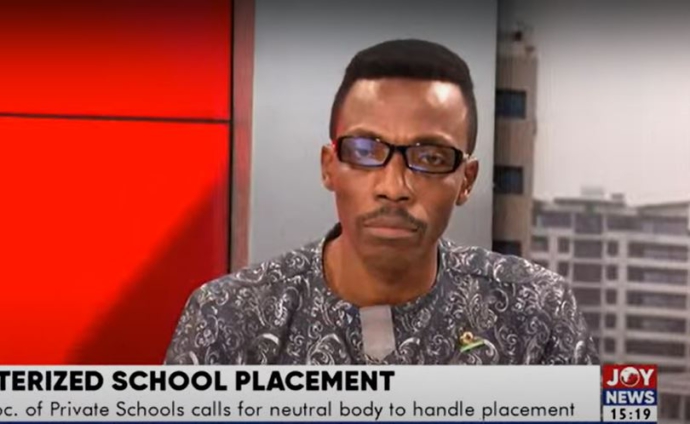 The General Secretary of Ghana National Association of Private Schools (GNAPS), Justice King Essiel, has called for a neutral body to handle the Computerized School Selection and Placement System (CSSPS).

Speaking on The Pulse on Thursday, Mr Essiel said Ghana Education Service (GES) is not neutral enough to handle the placements of eligible candidates into the Senior High Schools.

“Before this time, we had this placement system for about 10 years during which GES was the sole implementer of Ministry of Education policies and GES was the sole implementers, so they were in charge of both public and private schools, the situation is no longer the same. This time they are handling only public schools and private schools are supposed to be fending for themselves,” he said.

According to him, GES under the new law which was implemented in 2022 is only working for public schools, “GES has lost the right over public and private, no wonder they are discriminating against students from private schools.”

According to GNAPS, GES’s recent decision to reserve an additional 30% of all placements to all Grade A schools for public school children violates Article 25 of the Constitution, which states that Secondary Education in all of its forms must remain widely available and accessible to all.

As a result, the group called for the CSSPS to be handled by a neutral body, instead of GES, to ensure fairness.

He noted that “the idea behind getting the 30% from the local people and distributing it was to ensure that children in deprived communities who couldn’t get the required grades would be given that opportunity because we’ve seen that sometimes, they don’t do well because they didn’t get a lot of resources, but when they move on, they tend to do better.”

Meanwhile, former Rector of the Ghana Institute of Management and Public Administration (GIMPA), Prof. Philip Ebow Bondzi-Simpson, is pushing for a change in the admission process at the senior high school level.

He wants Heads of Schools to be allowed to admit students into their schools just as authorities at the basic and the tertiary levels, do.

Speaking at the Mfantsipim Stakeholders Forum in Cape Coast, on Monday, April 4, 2022 the Founding Dean of the UCC Law Faculty indicated that the Computerized School Selection and Placement System is destroying traditions of schools and hurting them.

He indicated that if in Ghana, out of all the levels of schools, it is only the secondary school that there’s computer placement, then, there’s the need for the stakeholders in education to evaluate it and change such a system.