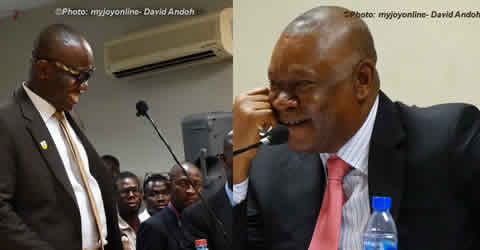 A properly prepped President of the Ghana Football Association, Kwesi Nyantakyi, Tuesday held many spellbound with an exceptionally eloquent testimony before the World Cup Commission.

He was accused variously of infractions and misjudgments which culminated in a woeful World Cup campaign by the senior national team, the Black Stars, in Brazil.

Serious looking and speaking in a matter-of-factly, the GFA President called for greater government funding for football as the best branding and marketing strategy for football, insisting, Ghana’s international games against the USA in 2006 got more attention only superseded by the election of America’s first black president Barack Obama.

The lawyer-turned-football-administrator narrated the struggles the GFA goes through to fund national teams in answer to claims by his critics who say he is not doing enough.

He explained that 82% of funds raised by the GFA go into managing the national football teams both men and women, with the senior national team the Black Stars consuming a whopping 74% while the junior teams bite off 17%.

He pointed out that since 2006, the FA has spent over Ghâ‚µ 36 million on national teams after struggling to raise Ghâ‚µ 34million in sponsorship.

“The GFA has spent over Ghc 36million on the national teams; not a single tax payer’s money is in that. So you can see that we are even using monies outside sponsorship to take care of national teams. Our other sources of funding are gate proceeds, 5% from international player transfers, fines imposed on clubs and players”.

“It is no wonder clubs are suffering” Nyantakyi said in answer to his critics who point accusing fingers at the FA for the falling standards of Ghana’s local league.

Needing to be restrained by Justice Dzamefe, the fired-up President lamented that government was not doing enough to help Ghana football.

“I think we [the state] are not putting in much. But the overriding consideration is that we [Ghana] are poor,” he conceded.

He confirmed that the GFA was struggling to pay coaches because despite a verbal agreement with the Ministry of Sports to foot the bill of coaches and other technical staff, government very often has not honoured its promises.

This state of affairs has forced the GFA to hire coaches and technical staff on a part-time basis which he acknowledged, is not in the best interest of Ghana football.

He said state funding covers only camping expanses which does not exceed two months, feeding, per diem and other recurrent expenditures.

Expenses incurred during longer stay in camp by the female national teams, he said, were shouldered by the GFA.

“We give them monies every week. It doesn’t come from the state. There is a caterer [at Prampram] who cooks food for all the national teams. She is crying for her money that is due her. And if you don’t give her the money, the team will pack off and if the team packs off from the [Prampram] camp it will be no excuse for GFA to say we haven’t received monies from government that’s why. We have to look for money wherever it is,” he soldiered on.

“Is that it?” Commission Chairman, Justice Dzamefe asked, looking baffled. “Yes My Lord, that it” Nyantakyi supplied to a loud laughter from the attentive audience.

“So from your expose everything is okay? The appeal court judge asked.

“Everything is not okay, Nyantakyi responded, I was just trying to show the burden that the FA has taken on”.

After the lead counsel for the Commission run out of questions for the day, Kwesi Nyantakyi owned the floor as he rapped the commission on the importance of sponsorship and government funding for football.

“If you go to South Africa, the state does not put money in football because they have a strong economy and they are able to attract sponsors. The South African FA has over 20 sponsors…it is in excess of 100million dollars… we have just $2million,” he said.

But unlike South Africa, in sub-Saharan Africa, governments have to spend on football because despite having weak economies, football brings great benefits to the nations, he explained.

Arguing for more government funding, he said football in West Africa is “the passion of the people. It brings national unity and cohesion. It is a tool for international relations and diplomacy, it is an income generation avenue.”

“Take your time”, Justice Dzamefe stopped him in his tracks, breaking the packed audience into spontaneous laughter.

He insisted football has the power to brand the nation better than what many government agencies such as the Ghana Investment Promotion Centre Ghana Tourist Board, and Brand Ghana office.

“In 2006 when Ghana played United States [in Germany], the internet hits for Ghana was the highest in history of the internet business until the election of Barack Obama in 2008. It is a fact”, he stressed.

“Really?”, a shocked Justice Dzamefe asked while the audience applauded.

“Football gives us that publicity without any extra investment. If we pay more attention to football, it will help the country”, he lectured.

Charged up and buoyed, the GFA President told the Commission he is ready to testify till 6 pm and asked the commission to give him some time to finish his testimony before they go for a break.

He said Germany invested over 500 million Euros to rebuild its national football after a poor 2002 European competition.

“All premier clubs have academies. They invested in the coaching development centres, they employed technical directors for all the academies. We know that is the best way to go but we don’t have the resources to do that”, he said.

“I am not saying that we should close down factories, close down schools and invest in football”, he emphasised.

But “we must cut our coat according to our cloth.”

He said expressed regret at how football administrators are unjustifiably maligned  branded thieves in the country and declared guilty until proven innocent and acknowledged the good work of the commission in clearing the very serious misconceptions.

“I wish I could stay up to 6 pm. I am here because of you. I am very happy to be here. And my presence here will clear more misconceptions. When you are in football, they think you are a thief, you are a criminal”

“My lord, let’s do one more of the controversial issues then we can break”, he requested, ripping up the audience in another round of laughter.

The three-man commission has so far invited several football administrators, a number of coaches, caterers who travelled to cook for football fans and other officials, former Black Stars players and some national icons branded as Brazil World Cup ambassadors.