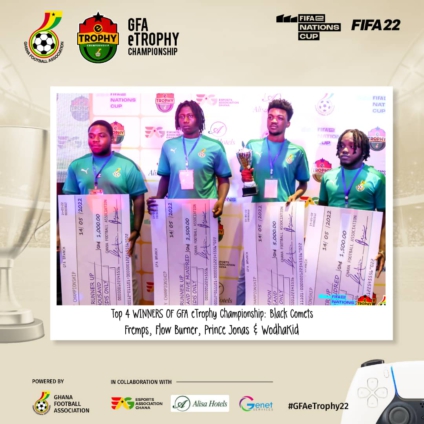 General secretary of the Ghana Football Association (GFA), Prosper Harrison Addo, says the association will give the Black Comets the necessary support needed to enable them to compete in the upcoming Series as they vie for the opportunity to represent Ghana at the Nations Championship to take place in Denmark.

Ghana held its maiden edition of the eTrophy Championship on Saturday, May 14, 2022. at the Alisa Hotels to select national team players with the GFA teaming up with the eSports Association of Ghana. Prince Jonas (winner), Habibu Sulley (first runner-up) and Frank Kpakpo (second runner-up) were given the official authorisation to be the national team players after five rounds of gaming at the event.

Speaking exclusively to JoySports after the competition, Addo said the Ghana FA are willing to support the newest addition to Ghana’s national teams as they chase global glory.

“The GFA will support them to enable them to train and go quickly into the eSeries [qualification before the eNations tournament]. We have matches against a number of countries in our group so they will be supported to compete,” he said.

“We know the timing is very short but they will do their best for the nation and then from there we can move and then build an even stronger team going into the next year.”

With the eSeries expected to kick start on May 20, the deadline for the submission of names for Ghana’s representatives is on Tuesday, May 17. The Black Comets will come up against Oman, Lebanon, Palestine and South Africa.