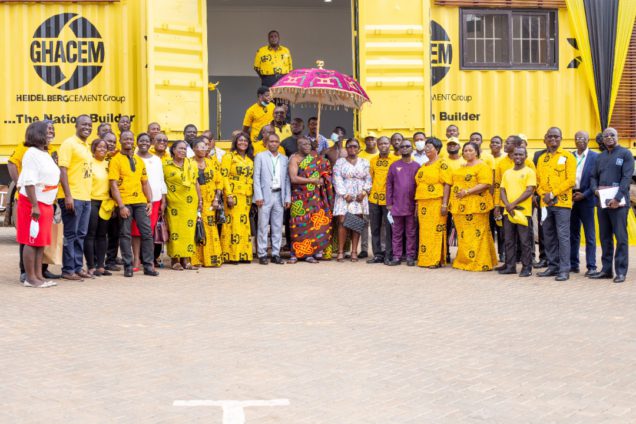 The leading cement manufacturer, Ghana Cement Limited (Ghacem), and the Kwame Nkrumah University of Science and Technology (KNUST) have launched the Ghacem Mobile Cement Academy and an E-payment platform to ease business transactions with customers.

The two leading institutions in the manufacturing industry and academia respectively also launched the E-payment platform that will facilitate the payment process for customers irrespective of their locations.

Speaking at the launch event on KNUST Campus in Kumasi, Chairman of the Ghacem Cement Foundation, Ehunabobrim Prah Agyensaim VI, stated that the collaboration is to enhance customer excellence as well as bridge the gap between industry and academia for national development.

Nana Prah Agyensaim VI explained that “there is the urgent need to seek continuous improvement for delivering customer excellence as a leading cement manufacturer in Ghana for our deserving loyal customers and partners.”

The Ghacem Cement Foundation Chair further noted that Ghacem was focused on improving the profitability of their customers through improved services and products, “while we strive to stay reasonably profitable as a company.”

He added that Ghacem will continue to ensure that customers have an easy way of doing business with them as well as assist with the transfer of knowledge that compares only to the world’s best practice in the cement business.

Commenting on the collaboration between the two giant institutions, he stressed that it “is academy and industry that will move this country and that is why I am proud of Ghacem for this initiative.”

According to him, the time for assumptions was over and it is important to invest in research and ensure academia and industry collaborations transform the country.

Nana Prah Agyensaim VI further encouraged government to strengthen its efforts to ensure a level playing field in the cement industry for the greater good of the Ghanaian economy.

Chief Commercial Officer of Ghacem, who spoke on behalf of the Managing Director, Mr. Ebenezer Somuah in his remarks noted that the collaboration between Ghacem and KNUST was to bridge the gap between industry and academia for national growth.

Welcoming the project team on the Ghacem Mobile Cement Academy, Prof. John Tiah Bugri, Provost of College of Arts and Built Environment at KNUST, expressed the University’s delight for officially launching the Mobile Cement Academy after a collaborative agreement signed in 2019.

Prof. Bugri stated that the impact of research is important for them and they have been able to deliver these impactful researches in collaboration with industry and the uptake of the research by industry was in good direction.

According to him, the collaboration between the two institutions led to the building of a mobile container with various facilities to help train many people across the country.

Mr. Somuah stressed that “Ghacem is undoubtedly not new in this collaborative drive. An example is the Ghacem Quarry Life Awards, which gives opportunity to the Biodiversity students of our Universities to compete with the rest of the world in terms of innovations in reclamation and maintenance of the natural habitats, especially at our quarry sites.”

The Chief Commercial Officer reemphasized Ghacem’s objective of putting customers at the centre of its entire operations, hence “placing premium on the product plus service offered to its customers.”

He further called on stakeholders and partners to ensure more of such collaborations for mutual benefits, reiterating that the Ghacem Board will continue to support such moves.