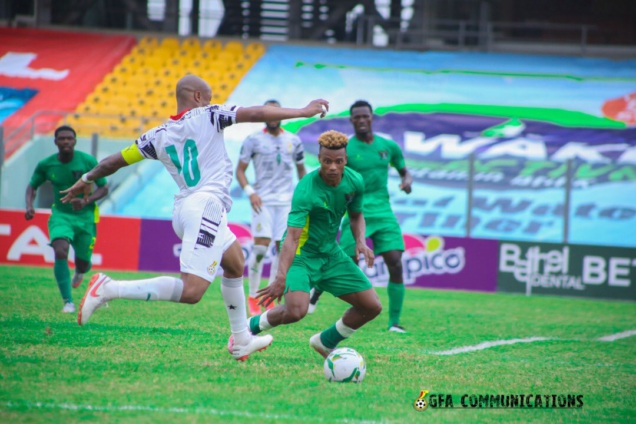 The Black Stars beat São Tomé and Principe to finish top of Group C in the 2021 Africa Cup of Nations (AFCON) qualifiers.

Ghana head coach Charles Akonnor opted for a strong lineup and his team dominated the game limiting the Falcons and True Parrots.

Nicholas Opoku and Baba Rahman scored their debut goals for the national team sandwiched with a penalty from Jordan Ayew as Ghana won 3-1.

Here are five things we learned from the game:

Ghana get the job done in difficult group

The Black Stars were drawn in Group C for the AFCON qualifiers alongside Sudan, South Africa and São Tomé and Principe.

A relatively difficult group considering the sharp rise of Sudanese football and the lasting threat of South Africa.

In the end, Ghana topped the group with 13 points ahead of Sudan who finished second with 12 points.

The Black Stars endured what was a tough qualification experience and would hope that shapes them ahead of the main tournament next year.

After scoring Ghana’s only goal against South Africa, Mohammed Kudus was brilliant once again against São Tomé and Principe.

The 20-year-old looked sharp on the ball and assisted two of Ghana’s three goals.

It was his pass that led to Jordan Ayew being fouled in the box; meaning Kudus in a way contributed to all three goals.

During the post-game press conference Charles Akonnor spoke of his admiration for the home-based players.

Akonnor called on 12 home-based players for the last two AFCON qualifiers and put his faith in most of them.

One thing is certain, and that’s Ghanaians won’t be seeing the last of these players with the World Cup qualifiers set to start in a couple of months.

Despite scoring Ghana’s third goal, there is still lots of work to be done when it comes to Baba Rahman’s overall gameplay.

He showed promising signs going forward but also gave the ball away too often, similar to what happened against South Africa.

Perhaps his long spell of inactivity means that he might need more time to ease into the national team setup again.

With the left back getting more consistent play time with PAOK, he can only improve.

Essentially, the game was affected as players struggled to control passes and go past their opponents.

Recently, the game between Asante Kotoko and Bechem United had to be called off because the Accra Sports stadium couldn’t contain the rain.

Work has to be done on the pitch especially because more than five teams use it for their league assignments regularly.

DISCLAIMER: The Views, Comments, Opinions, Contributions and Statements made by Readers and Contributors on this platform do not necessarily represent the views or policy of Multimedia Group Limited.
Tags:
Black Stars
Black Stars squad
sao tome and principe