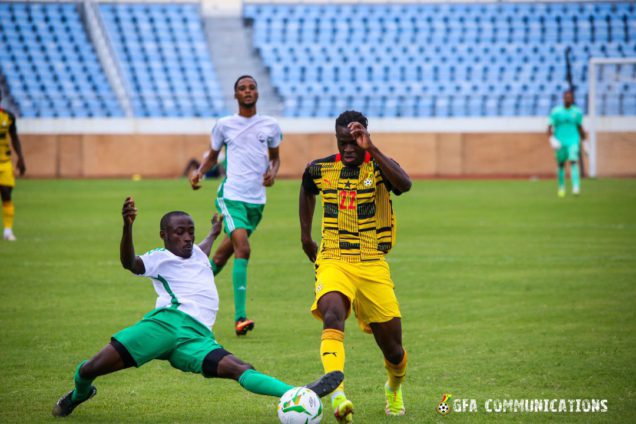 Ghana demolished lower-tier side Soccer Intellectuals in a warm up game at the Cape Coast stadium on Wednesday to give Milovan Rajevac a chance to assess his players.

Kamaldeen Sulemana, who has been in red hot form, opened the scoring with a well taken goal in the 15th minute.

Jordan Ayew had a chance to make it five before half time but missed a penalty. The Crystal Palace forward was deployed as a right winger in the game and provided two assists in 45 minutes.

Second half substitutes Fatawu Issahaku, Benjamin Tetteh and Yaw Yeboah all got on the scoresheet with Issahaku also getting a brace.

Rajevac handed starting berths to debutant Jojo Wollacot in goal and Philemon Baffuor at right back with Andy Yiadom out injured.

In midfield, Thomas Partey returned to the team playing alongside Baba Iddrisu and Kudus.

Jordan Ayew, Fameyeh and Sulemana made up the front three.

The friendly was to give the Serbian coach an opportunity to have an extensive look of his players live in action before the World Cup qualifier against Zimbabwe on Saturday.