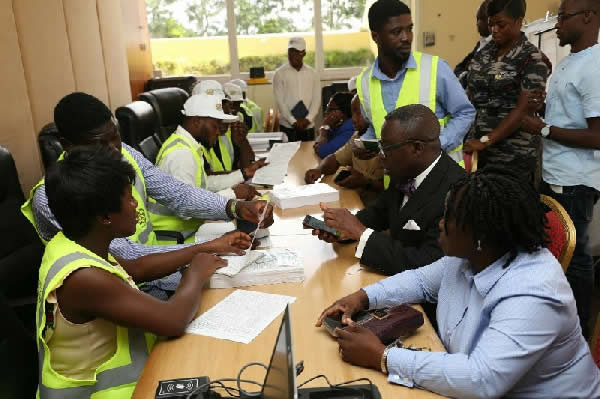 The National Identification Authority wants Ghanaians to help weed out foreigners from a national registration exercise for the Ghana Card.

Its Chief Executive, Prof. Ken Attafuah explained a foreigner who participates in the exercise commits a criminal offence and revealed the law is dealing with a Nigerian arrested for attempting to register as a Ghanaian.

The suspect whose identity is yet to be confirmed claimed to hail from Keta but was found to come from Anambra, Nigeria. His case has been adjourned to 23 May at the circuit court in Accra, he revealed.

Two Nigeriens are also being trailed for attempting to register as Ghanaians at a registration centre at the Abossey Okai Central Mosque in Accra.

Abdul Samed and Abubakar Ruali were aided by 26-year-old Data Input Officer at the National Identification Authority (NIA) Timothy Wuni who has been arrested.

He took 60 cedis and would have registered the two but for the vigilance of his supervisor.

Prof. Ken Attafuah explained anyone who has reason to believe a foreigner has registered, is registering or is attempting to register should report to an NIA officer.

An NIA officer will help the complainant and the accused to fill a Challenge Form which will help a District Review Committee chaired by a magistrate or circuit court judge to determine the commission of a crime.

The NIA boss explained a person claiming to be a Ghanaian is likely to have a place of birth in Ghana, have school mates, go to church or mosque or be recognized within the society.

Prof. Attafuah also revealed an NIA official has also been arrested after extorting 10 cedis from an applicant. He expressed disappointment that despite training, a few NIA officials misconduct themselves.

“I am pleading with Ghanaians, enlisting their support, their cooperation and understanding so that we will arrest and prosecute all those Ghanaians who do such things, ” the criminologist said.