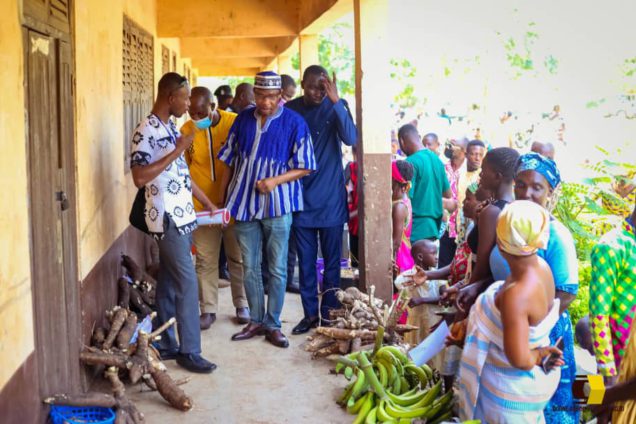 North Tongu DCE, Osborne Divine Fenu says Ghana is now a food basket of the West African Sub-region as a result of the good policies by President Akufo-Addo.

He said that since most of the people in the District are engaged in agriculture, farming, and fishing, the region has a higher potential for agribusiness.

He said the “District’s abundant arable land and water bodies are a great advantage to us, and we need to make the best out of it.

“I am therefore making a passionate appeal to the youth to venture into agriculture and take advantage of the opportunities for agribusiness to become financially independent,” he said

He said globally, about 2 billion people do not have regular access to sufficient, safe, and nutritious food, and an even more significant number are overweight or obese.

At the same time, technical and structural change and the repercussions of Covid-19 have put pressure on the livelihoods of people working on 570 million farms worldwide and along other stages of the food supply chain.

A consolidated food systems approach, according to Mr Fenu, is needed to exploit synergies and manage trade-offs between the different dimensions of food production.

“The lessons of Covid-19 have created a new sense of awareness about building strong food systems that ensures resilience and avoid over-dependence on food imports,” Mr Divine Fenu said.

He said the incumbent government, even before coming to power, has one of its campaign promises, One village One Dam, One District One Factory, anchored on agribusiness.

“In this District, we are blessed to have a number of factories all in support of agribusiness development. We have the Musahamat Company Limited, Sino Ethanol Manufacturing Company Limited among others, I encourage the private sector to show interest in government policies to be supported to expand to achieve government’s objective of the IDIF,” Mr Fenu said.

Under the Planting for Food and Jobs for 2021,  Mr Fenu said the District has distributed 9,100 bags of subsidized fertilizers to 481 farmers (330 males and 151 females).

For Planting for Export and Rural Development, the district has distributed 10,000 cashew, 500 coconut, and 700 mango seedlings to over 100 Farmers.

“I will once again urge the youth to take advantage of the business opportunities in the agriculture value chain to contribute more to the country’s developmental agenda,” he said.