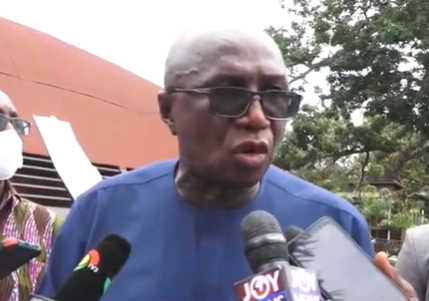 Ghana’s national security operatives, together with its counterparts from Burkina Faso and Côte d’Ivoire have undertaken swoops in some parts of Northern Ghana to deal with the threat of Jihadist insurgence in the sub-region.

The weekend operation led to the arrest of over 200 Ghanaians and some 107 foreign nationals engaged in illegal activities including, mining in some communities in the Upper West region.

National security adviser Emmanuel Okyere says the operation will be sustained to ensure the safety of the country.

“We are not waiting for any fire to get to us, we are doing whatever possible to prevent that fire from getting to us.

“So all these exercises we are doing in these particular regions annually is to prevent any terrorist attack from our land,” he told the media.

The taskforce destroyed mining equipment in the communities they visited.

Some victims of the operation told JoyNews mining has remained their only source of livelihood.

Thus, the actions of the taskforce will have dire effects on their upkeep.

“Early dawn we saw them burning our machines when we came out to question them and they said we shouldn’t come close to them.

“In this community, we have nothing doing except this illegal mining. We know it’s illegal but we have nothing to do. There is no fertilizer for our farms so we are depeniding on this small scale mining to survive,” one explained.