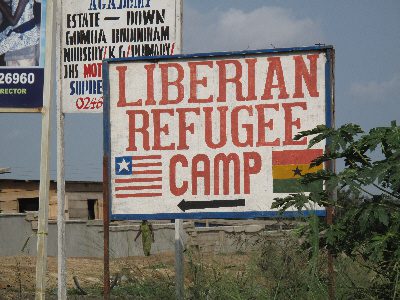 Liberia’s Foreign Minister, Dee-Maxwell Saah Kemayah, says a joint committee has been constituted by Ghana and Liberia to find permanent solutions to issues surrounding the proposed demolition of the Buduburam camp.

He said the committee has also been mandated to suggest a framework that will be implemented by both countries to ensure that the welfare of the Liberians within the former refugee camp is guaranteed.

“Ghana accepted the proposal of Liberia that they will put together a joint technical team to look at the issues of Liberian in Budumburam camp and the proposed demolition exercise.”

“The Ministry of Foreign Affairs of Liberia is on our side and the National Security of Ghana is on the Ghanaian side to look at the situation and ways of finding lasting solutions to it.

Following concerns raised by chiefs and opinion leaders that the camp has become a den for criminals, the government, through the Gomoa East District Assembly asked the residents to vacate the area.

However, the directive was greeted with agitations and protests by the residents, who vowed to resist the planned shutdown of the facility.

While some pleaded for compensation, others insisted they are not moving until the government fulfils its agreement with the United Nations.

But speaking after assessment tour of the camp, the Liberian Foreign Affairs Minister stated that the move to resolve the matter has become necessary while urging the residents to grateful to the Ghanaian government.

“We all know it is not be easy to open your doors to strangers but this Ghanaian government has been able to do so for three decades and I think we must applaud them for this gesture.”

“I also want to tell my people not to politise the situation back home and here. The reason is that it can tarnish the hard earn image between the two countries,” he told Citi News.

The Camp was decommissioned as a refugee base by the United Nations High Commissioner for Refugees in June 2010, and had since become a settlement, now being described as a hideout for social deviants, including alleged robbery gangs.