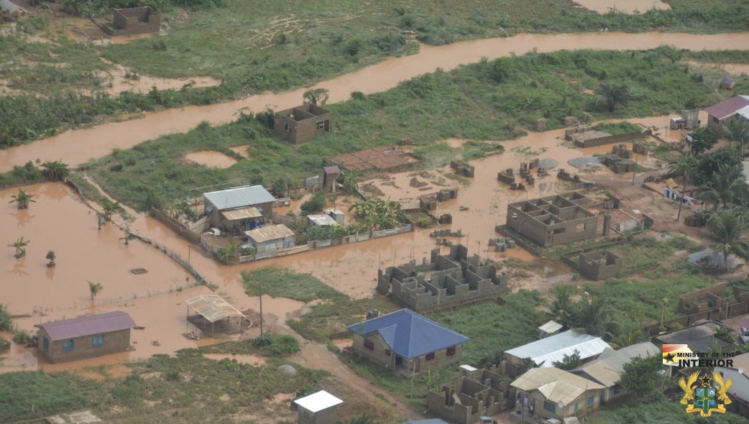 Flooding is one of the major effects of climate change

Global temperatures will continue to rise and weather extremes become more intense if there is no radical and immediate action to cut down greenhouse gas emissions (GHG).

These are some of the stark warnings laid out in the United Nations (UN) Intergovernmental Panel on climate change’s new report on the Physical Basis of climate change.

“It is bleak and the threat to humans and the earth is severe: it’s A Code Red for Humanity, as stated by the UN Secretary-General.”

A statement signed by Mr Daryl Bosu, Deputy National Coordinator of A Rocha Ghana said: “we still have time to reverse global warming and minimise the intensity of climate change impacts if we all pull together and act fast.”

The statement called on policy makers to promote a radical shift towards green development, and the private sector to innovate immediately to support a green trajectory, adding, having caused most of this global crisis, rich countries must provide urgent support to poorer countries to adapt to the impacts.

The report indicated it will get worse before it gets better and that it was now irrefutable that the unprecedented warming of the world since industrialisation had been caused by GHGs from human activities.

The statement said they were also the main drivers of changes such as increased global precipitation, shrinking glaciers and ice sheets, sea-level rise, and ocean warming and acidification.

It said the increased frequency and intensity of rainfall, floods, droughts, storms, and heat waves were also all down to activities.

This statement said the increasing pace of sea-level rise – reaching an average 3.7 mm yr-1 for 2006-2018 – will continue for 100s to 1000s of years as the warmer temperatures continue melting glaciers and ice sheets.

“Other changes are also locked in for decades due to emissions that have already happened. This means that, even if we radically reduce our GHG emissions immediately, some changes will still occur,” it added.

The statement said using the five levels of GHG emission scenarios to model how the climate system will react, the report explained.

According to the statement, sea-level rise under low emissions will be half the rise projected for very high levels, adding, “we need a radical and immediate step-up in action on GHG emissions to ensure that the worst-case scenarios never happen.”

The statement said reaching net-zero for human-caused CO2 emissions – where their production is balanced by their removal – is urgent if we are to stabilize human-induced global temperature rise.

It said human-made techniques for removing CO2 from the atmosphere have been developed, but have wide impacts on water availability and quality, food production, and biodiversity and that we must avoid them at all cost and reach net zero through real and fast GHG emissions reductions and increased natural carbon sinks.

The statement said impacts identified specifically for Africa included; increased monsoon rains for West Africa over the mid- to long-term, and delays in both their onset and retreat.

It said frequencies and intensities of rainfall and flooding will increase over most of Africa and Asia even at a 1.5oC rise in temperature and with a 2oC rise, droughts will be more severe and frequent across many regions of Africa, South America and Europe.

It said urban and rural areas will need to adapt as the protectors of our food security and biodiversity, farmers and rural communities need urgent specific support for adaptation and resilience-building to cope with the changes.

According to the statement, there should be a deliberate policy and investment drive to increase direct public and private funding for community-based adaptation mechanisms.

“The Green Recovery Action Plans and the African Green Stimulus Programme are timely continental initiatives that cannot be undermined and that should rally African Countries for a well-coordinated green recovery and low emissions development pathway”.

The statement said that action by Ghana was critical to the overall global action as Ghana needs to prioritize mitigation and adaptation mechanisms more than ever and need to ensure all investments, public and private, prioritize and enhance our adaptive capacity and help build resilience at levels of governance and socio-economic development sectors.

It said Government must do far more to protect and strengthen Ghana’s safety nets such as food sovereignty, forests and protected areas, natural water resources and biodiversity.

“Current national and decentralized processes to integrate climate action within our Nationally Determined Contributions and Medium-Term Development Plans are great and should prioritize investments and implementation beyond planning and excellent documentation. The national processes should endeavour to align biodiversity conservation as a crucial imperative,” the statement added.

It said farmers need support from the government and others to adapt and build resilience to climate change through training in sustainable agriculture, and access to seeds, equipment, services, and other inputs.

“Urban, rural and coastal areas need protection from threats of flooding, storms, and sea-level rise. A critical action must be to stop all developments on floodplains and areas that protect coastal communities from storm surges, and more crucially, prioritize security for all mangrove ecosystems in Ghana”.

The statement said Ghana’s forests must also be protected to help communities adapt to climate change, reduce the damaging impacts of storms, stop soil erosion and landslides, provide clean water even when other sources are polluted by floods, keep people cool in extreme heat, strengthen food security, and so much more.

It said delaying action will place an immeasurable burden on Ghana’s children and could make Africa uninhabitable due to the extreme heat, as temperatures are rising far faster here than the global average, and there is still time to reduce the impacts, but we need radical action now, and not more delays.