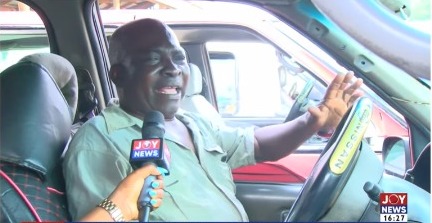 Throughout its history, the nation has undergone droughts, but the one from 1981 to 1983 stands out for its severity.

In 1983, Nigeria expelled two million undocumented West African migrants, half of whom were from Ghana. The sturdy, checked bags into which they packed their belongings have become a symbol of exclusion and intolerance. Four decades later, the region is yet to confront its emotional baggage.

Kwame Moses, a driver who was 14 years at that time narrates how his family lost all their food crops to a bush fire.

“Those of us who were witnesses to that era, saw a lot. What I recall was that people were really suffering. It was even difficult to get food to eat and this was due to the bushfires. There were no rain and the sun was really bright and hot.

“There could be bushfires anytime. Farms were getting burnt. I remember in 1983 my father had a farm. That was our main source of livelihood as a family. Unfortunately, one day, when we got there, everything was burnt to the ground. You could not even walk on the land barefooted on a regular day when there was no fire,” he said.

People began to have difficulty obtaining food and even the wealthy had money but could not find food to purchase. Some traders jacked up their prices in order to profit from the circumstance.  This compelled the government to enact price control measures.

Sadly, the military guards posted at the marketplaces to ensure that traders complied with the established rates, flogged and tortured vendors for hoarding items.

The deportation order by Nigerian President Shehu Shagari was in response to Ghana’s Alien Compliance Order of 1969 where many illegal foreign nationals, including Ghanaians, were expelled from Ghana. At that time, Ghana was unable to cater for the influx of its own people from Nigeria.

Deportees gathered their properties into trucks, cars, boats, taxis and made their journey to Ghana.   Some made it to Ghana on foot.

40 years on, the big question is what has changed. Asare, says he never wants Ghana to go back to those dark days. He stressed that freedom is more important to him than anything else.

Kwame Moses said “I see much difference, even though things are hard in the country, it cannot be compared to 1983. There are no jobs and money but I believe if one finds work and gets money, they can easily buy anything they want. But in 1983 it wasn’t like that. Even if you have money, you can’t get anything to buy.”

But Richard Asrifi believes otherwise. He says “that period is better than this because, we had money and any small amount could afford to buy a lot, unlike this period where money is hard to come by.”

DISCLAIMER: The Views, Comments, Opinions, Contributions and Statements made by Readers and Contributors on this platform do not necessarily represent the views or policy of Multimedia Group Limited.
Tags:
Famine
Ghana
Ghana Must Go
Nigeria