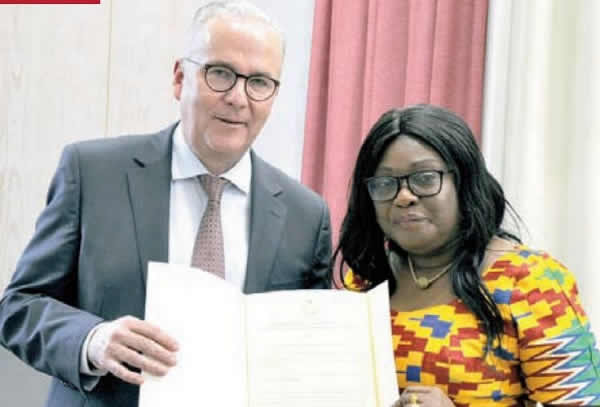 Ghana has opened a consulate in the German city of Dortmund.

The opening ceremony of the consulate was held recently with top local officials joining Ghana’s envoy to Germany, Mrs Gina Ama Blay, for the plush event.

At the opening ceremony, there was the transfer of the office of Consul from Manfred O. Schroder to Klaus Wegener.

The General Consul, Manfred O. Schroder, did the presentation of the structure to Consul Klaus Wegener, the President of Auslandsgesellschaft Dortmund, who has represented Ghana’s interests for more than 50 years.

The Mayor of Dortmund, Manfred Sauer, was present as a guest of honour during the ceremony.

Consul Klaus Wegener will manage the Consulate of Ghana in North Rhine-Westphalia from now on.

General Consul Manfred O. Schröder, aged 94, said for the more than 50 years that he has held the office he had made friends all around the world because, he added, Ghana maintains consulates in all large capital cities.

With many Ghanaians living in many places such as the USA such relations are important, he said.

Ambassador Gina Blay thanked General Consul Manfred O. Schröder for his many years of service and expressed her conviction that his personal relationship with Ghana and the Embassy especially, will continue as before.

She concluded her speech with the words: “Here is a son of the Republic of Ghana,” and asked the audience for a standing ovation for the outgoing consul.

Former President John Dramani Mahama honoured Manfred O. Schröder with the highest award of the Republic of Ghana, the Grand Medal of Ghana in gold, for his decades of service.

DISCLAIMER: The Views, Comments, Opinions, Contributions and Statements made by Readers and Contributors on this platform do not necessarily represent the views or policy of Multimedia Group Limited.
Tags:
Consulate
Dortmund
Gina Blay