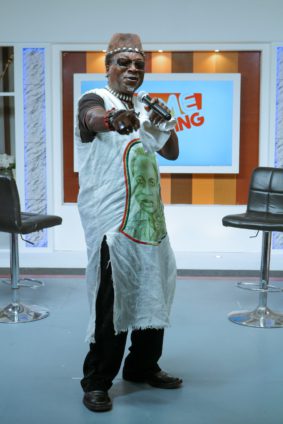 Highlife artiste Nat Brew best known in the entertainment industry as Amandzeba, says Ghanaba passed the mantle of music to him, and he is passing it on to Epixode.

The ‘Wogbe’ hitmaker said he was surprised when Ghanaba broke the news to him.

Speaking in an interview with Prime Morning host, Benjamin Akakpo, he said musicians are messengers, and it is vital for them to live long enough to disseminate their information.

The ‘Kpanlogo’ hitmaker admitted that there should be someone to carry on with their legacy if they pass on.

“We were together when he said it, and I thought he was referring to his son Glenn Gillespie Warren but he said ‘oh you,’ and was pointing at me. I was shivering. Can I shoulder the burden of the divine drummer? No way, but he gave it to me.“

“You have to live long to disseminate the information you have; the next messenger is Epixode. I love the position of being a messenger. If Ghanaba passed it on to me, I haven’t told anybody this is the first time I am revealing it,” he explained.

He further explained that if Ghanaba trusted him to pass the baton to him, it is a step in the right direction if he passes it on to Epixode.

Guy Warren popularly known as Kofi Ghanaba, was one of the most influential and well-travelled Ghanaian musicians of the mid-20th century.

In the 1950s, Kofi Ghanaba sent Ghanaian drumming to the western world. Long before African music culture became fashionable, he was combining African rhythms with western harmonies and emphasising the African origins of jazz.

He was an early member of E.T. Mensah’s highlife band the Tempos, and later part of the American jazz milieu that included Charlie Parker, Miles Davis and Thelonious Monk. He was also a key inspiration for the Nigerian Afrobeat innovator Fela Kuti.

Some of Ghanaba’s songs include, ‘Dancing Drums’, ‘Ours’, ‘This is our Land’, ‘Eyi Wala Dong’, ‘Gye Nyame’, ‘Monkeys’ and ‘Butterflies’, ‘Freedom Dance’, ‘The High Life’ and ‘Africa Speaks’.

The talented musician and drummer died on December 22, 2008, and a tribute was held at the Jazz Gallery in New York in his honour.

Amandzeba attributed his longevity in the music industry to his creativity.