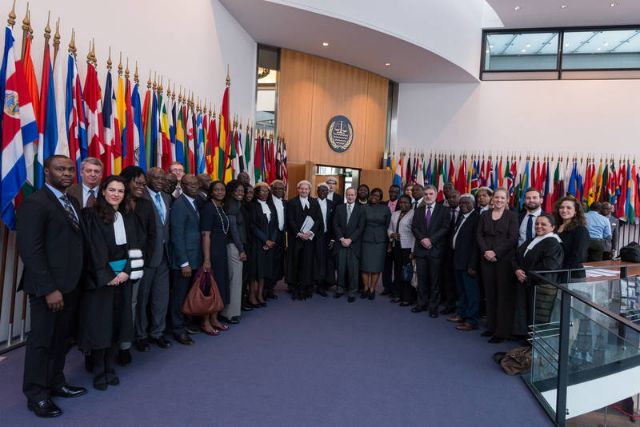 The long wait is over and the International Tribunal on the Law of the Sea (ITLOS) has accepted Ghana’s arguments in the maritime dispute with Ivory Coast.

Ghana argued that the equidistance principle is used in delimiting the maritime boundary between the two countries.

Whilst the tribunal rejected Ghana’s claim that Cote d’Ivoire is estopped from making a claim for the disputed territory because of prior conduct, the Chamber equally rejected Ivory Coast’s claim that a meridian measurement is used.

Below is the summary from ITLOS

At a public sitting held today, the Special Chamber of the International Tribunal for the Law of the Sea, constituted to deal with the Dispute concerning delimitation of the maritime boundary between Ghana and CoÌ‚te d'Ivoire in the Atlantic Ocean (Ghana/CoÌ‚te d'Ivoire), delivered its Judgment. The Judgment was read by Judge Boualem Bouguetaia, President of the Special Chamber.

The dispute was submitted to a special chamber formed in application of article 15, paragraph 2, of the Statute of the Tribunal by way of a special agreement concluded between the two States concerned on 3 December 2014. On 25 April 2015, the Special Chamber delivered its Order on a request for the prescription of provisional measures filed by CoÌ‚te d’Ivoire. Further to the closure of the written proceedings, hearings on the merits of the case took place from 6 to 16 February 2017.

Final submissions of the Parties

In its final submissions, Ghana requests “the Special Chamber to adjudge and declare that:

1) Ghana and CoÌ‚te d’Ivoire have mutually recognised, agreed, and applied an equidistance-based maritime boundary in the territorial sea, EEZ and continental shelf within 200 M.

2) The maritime boundary in the continental shelf beyond 200M follows an extended equidistance boundary along the same azimuth as the boundary within 200 M, to the limit of national jurisdiction.

3) In accordance with international law, by reason of its representations and upon which Ghana has placed reliance, CoÌ‚te d’Ivoire is estopped from objecting to the agreed maritime boundary.

4)  The land boundary terminus and starting point forth agreed maritime boundary is at Boundary pillar 55 (BP 55).

6) Consequently, the maritime boundary between Ghana and CoÌ‚te d’Ivoire in the Atlantic Ocean starts at BP 55, connects to the customary equidistance boundary mutually agreed by the Parties at the outer limit of the territorial sea, and then follows the agreed boundary to a distance of 200 M. Beyond 200 M, the boundary continues along the same azimuth to the limit of national jurisdiction. The boundary line connects the following points, using loxodromes (the geographic coordinates are in WGS 1984 datum):

In its final submissions, CoÌ‚te d’Ivoire requests “the Special Chamber to reject all Ghana’s requests and claims, and:

(1) to declare and adjudge that the sole maritime boundary between Ghana and CoÌ‚te d’Ivoire follows the 168.7o azimuth line, which starts at boundary post 55 and extends to the outer limit of the Ivorian continental shelf;

(2) to declare and adjudge that the activities undertaken unilaterally by Ghana in the Ivorian maritime area constitute a violation of:

(i) the exclusive sovereign rights of CoÌ‚te d’Ivoire over its continental shelf, as delimited by this Chamber;

(ii) the obligation to negotiate in good faith, pursuant to article 83, paragraph 1, of UNCLOS and customary law;

(iii) the obligation not to jeopardize or hamper the conclusion of an agreement, as provided for by article 83, paragraph 3, of UNCLOS; and

(3) to declare and adjudge that Ghana has violated the provisional measures prescribed by this Chamber by its Order of 25 April 2015;

(a) to invite the Parties to carry out negotiations in order to reach agreement on the terms of the reparation due to CoÌ‚te d’Ivoire, and

(b) to state that, if they fail to reach an agreement within a period of 6 months as from the date of the Judgment to be delivered by the Special Chamber, said Chamber will determine those terms of reparation on the basis of additional written documents dealing with this subject alone.”

In its Judgment of 23 September2017, the Special Chamber decided as follows: “THE SPECIAL CHAMBER

Finds that it has jurisdiction to delimit the maritime boundary between the Parties in the territorial sea, in the exclusive economic zone and on the continental shelf, both within and beyond 200 nm.

Finds that there is no tacit agreement between the Parties to delimit their territorial sea, exclusive economic zone and continental shelf both within and beyond 200 nm, and rejects Ghana’s claim that CoÌ‚te d’Ivoire is estopped from objecting to the “customary equidistance boundary”.

and is defined by turning points A, B, C, D, E, F with the following coordinates and connected by geodetic lines:

From turning point F, the single maritime boundary continues as a geodetic line starting at an azimuth of 191° 38’ 06.7’’ until it reaches the outer limits of the continental shelf.

Finds that it has jurisdiction to decide on the claim of CoÌ‚te d’Ivoire against Ghana on the alleged international responsibility of Ghana.

Finds that Ghana did not violate the sovereign rights of CoÌ‚te d’Ivoire.

Finds that Ghana did not violate article 83, paragraphs 1 and 3, of the Convention.

Finds that Ghana did not violate the provisional measures prescribed by the Special Chamber in its Order of 25 April 2015.”

The single maritime boundary is illustrated in the sketch map below, which is taken from the Judgment.