The family of Emmanuel Essien, the missing Ghanaian attached to a Chinese vessel as an Observer, is accusing government and police of failing to help them ocate their relative, five months since the case was reported.

“I don’t believe the government and the authorities valued the work my brother was doing,” a worried James, Emmanuel’s elder has told The Guardian.

He added: “If they did, they would attach some seriousness and urgency to the investigation. We know nothing. We don’t understand how it can take so long,”

He was a fishing observer, one of Ghana’s frontline defenders against an overfishing crisis that is among the worst in west Africa. According to The Guardian, Illegal and destructive practices by foreign-owned trawlers are draining the Ghanaian economy of an estimated £50m a year. Along its 350-mile coastline, overfishing has driven small pelagic species known as “people’s fish”, the staple diet, to the verge of collapse.

In 2015, as part of a $55m World Bank project, Ghana placed an observer on every industrial trawler, to collect data and report violations of fisheries law. Around the world, the work of these observers is becoming ever more dangerous. In 2017, a report by Human Rights At Sea found six cases of disappearances of observers in the Pacific. It concluded their work was hampered by “inadequate legal protection” and “physical danger”.

Essien’s diligence made him popular with the Fisheries Commission, according to Bernard. His report on the penultimate vessel he worked on, dated 24 June, ended: “I humbly plead with the police to investigate further.”

But his disappearance on 5 July from a trawler called Meng Xin 15, and the failure of the authorities to find out what happened, has devastated his family and shocked Ghana’s fishing community.

Essien’s younger brother, Bernard, claimed that two weeks before his brother’s disappearance, he had written a statement and addressed it to the Ghanaian police. In that statement, he said, contained an account and accompanying video footage of alleged illegal fishing by a trawler he had been working on.

If the allegation was proved true, the ship’s captain faced a minimum fine of $1m. 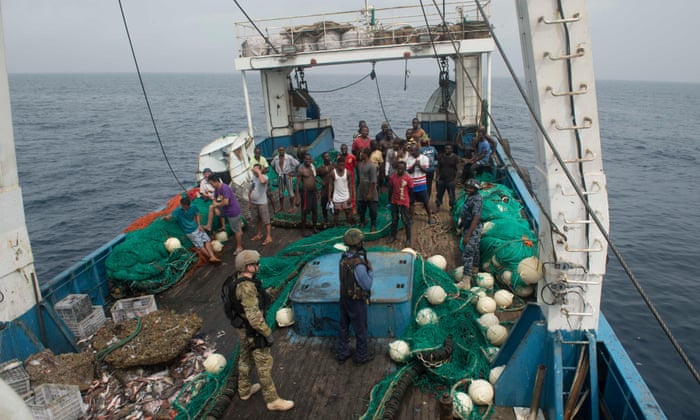 Ghanaian navy and US coast guard officers board a fishing vessel in the Atlantic in 2016. Photograph: Amy M Ressler/Alamy

An Observer investigation has found serious allegations of violence, drug-taking and bribery aboard the industrial fleet that trawls this part of west Africa. Interviews with fishermen, observers and sources in the commission suggest criminality is ignored, raising questions over whether the lives of observers are being put at risk.

Essien’s family is no nearer learning the truth. Bernard, a barber, has lost weight and has been having difficulty sleeping since his brother disappeared. They all looked up to Emmanuel, their main breadwinner. Four months on, his daughter, Faustina, six, asks for him constantly, while his son, Takyi, 12, and his four brothers and two sisters wait for answers.

“The little one keeps asking questions,” said James, 34, Emmanuel’s elder brother. “We tell her her father has gone to work and he is not back. My mother keeps calling me, saying: ‘Have you heard from the police? Tell them to bring back my son.’ We are waiting for the results of the investigation. We are all trying to cope.”

An investigation report, which has not been made public, is now with the Attorney-General.

It is taking too long, the family says.

Essien was reported missing on 5 July, after failing to return to the cabin he shared with three Chinese crew – the chief officer, second chief officer and the cook. A police investigation found “no signs of violence or anything incriminating”. 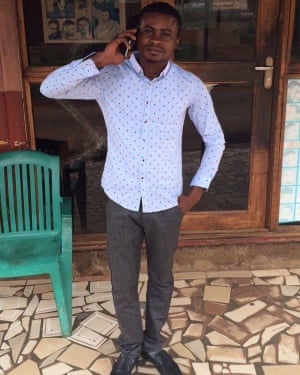 Essien had been threatened, they said, for reporting illegality on trawlers and was about to quit.

“There were days he came back and said he was worried,” said Bernard, 24, the youngest brother. “The job of an observer is to make sure they are obeying the laws. There were times those in charge of the vessel got angry at him for doing that. They told him not to. He told me it was difficult. He wasn’t comfortable. He said it was dangerous work.”

In a hotel in Accra, several trawlermen from Tema, 25km to the east of the city, talked to the Observer, on condition of anonymity. Illegal fishing is common, they said, confirming reports of the targeting of small pelagic fish or “saiko” by trawlers, an illegal trade revealed by the Environmental Justice Foundation this year. Two of them witnessed observers taking bribes, they said. Some had been beaten by the Chinese crew – 90% of the vessels are estimated to be Chinese-owned.

“The observers are there to report bad behaviour,” one fisherman said. “It is like being a spy. When we heard about an observer going missing, we were very unhappy. It is very dangerous.”

It was not easy, the fishermen agreed, for an observer to simply fall overboard. “It would be very hard,” one said. “He is not working on deck like the fishermen.”

James agrees: “I don’t believe my brother threw himself off the boat into the sea. There is no way he would do that. I suspect there was a co-ordinated attempt to take him off. He was going to write up a report. Perhaps there was a disagreement. Perhaps the Chinese didn’t like it.” 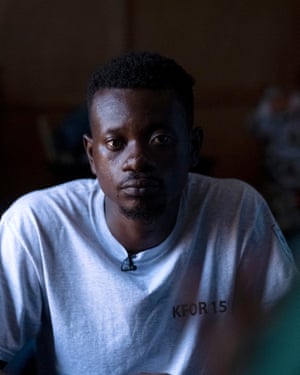 Bernard Essien, who said his brother Emmanuel planned to quit his job. ‘There were days he came back and said he was worried.’

The Meng Xin 15 belongs to a Chinese state-owned enterprise, Dalian Meng Xin Ocean Fisheries, according to an investigation by China Dialogue Ocean, which found the fleet has committed 16 fishing offences in Ghana since 2016. Its special status as an “offshore fishery enterprise of the ministry of agriculture” gives access to subsidies and tax exemption.

One former fishing observer said he quit his job after hearing about Essien. “It’s not safe. When I found out Emmanuel was missing, I thought the same thing could happen to me.”

Showing a photo on his phone of a crew member dumping a basket of fish overboard, he said he had to perform his duties covertly. “I have to hide when I am taking pictures, because if they see me, they might hit me.”

Observers shared a cabin with Chinese crew who were closer to the management than their Ghanaian counterparts. There were about 20 Ghanaians and six Chinese, including the captain and first officer, he said.

The source admitted once taking a bribe of 1,000 cedis (about £140 or two-thirds of his monthly wage) from a captain, not to report the illegal transhipment of pelagic fish.

The dangers of working for the enforcement agencies, offshore but without protection, are recognised. A source at the monitoring, surveillance and control unit of the fisheries commission said observers are warned of “hostility” on vessels. The source said: “We tell them, don’t expose yourselves too much. In the sense that on board the vessel, there’s no policemen. All the boys are there smoking weed. The Chinese are always drinking whisky. The situation is very hostile.”

When they film alleged illegalities, they are threatened “most of the time”. The source added: “It is a very dangerous job.”

Some 80 to 90% of reports by observers contained incriminating evidence of illegal fishing. Despite such allegations, only 23 trawlers were sanctioned for illegal fishing in 2018 and prosecutions were subject to political interference, according to the commission source. “We choose the observers … but politicians call our bosses and tell us: ‘Don’t prosecute these people.’”

The Ghanaian government insisted observers’ reports are investigated and prosecutions continue, but declined to provide any data. Last month, in what was hailed as a sign that Ghana was beginning to take action, a trawler was fined $1m for catching almost 14 tonnes of small pelagic fish in a single day. It was the first such fine under the 2014 fisheries act.

Earlier this year, the World Bank highlighted Ghana’s “weak commitment” to reducing the number of industrial trawlers and its “less than agreed” scale of law enforcement, including “partial prosecution of offences and collection of fines”.

In a statement, Ghana’s executive director of fisheries, Michael Arthur-Dadzie, said its monitoring unit had tried to investigate allegations of bribery and extortion, but officers did not get “much needed co-operation”.

“These therefore remains allegations,” he said. He did not know of any observers reporting being threatened for filming or violence from Chinese crew and was also unaware of crews being forced to carry out illegal fishing.

Asked if his brother had expressed fear over his job, Bernard said: “He didn’t say afraid. But he was worried. After his last trip but one, our sister asked him why. He said: ‘There’s blood, there’s blood all over.’ But he wouldn’t say anything more.”