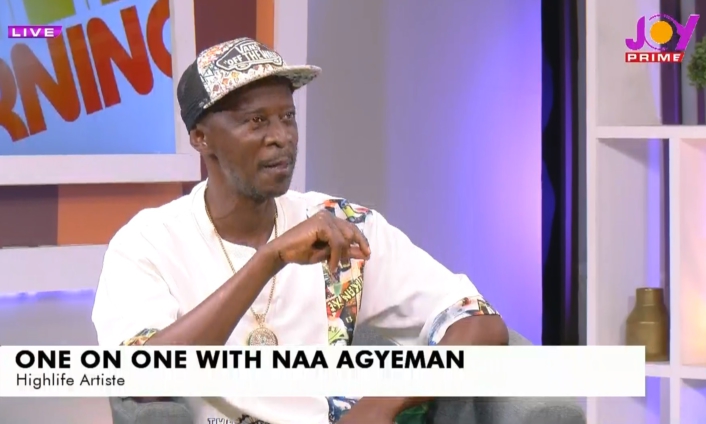 Although he contends that infusing highlife with foreign music is not bad, the veteran musician wants Ghanaian highlife artistes to produce original highlife songs.

In an interview with Joy Prime’s KMJ on Prime Morning Thursday, the highlife artiste said that successive musicians have done too little in churning out authentic Ghanaian highlife tunes.

This trend, Naa Agyeman said is contributing to the low interest in patronage of Ghanaian highlife music.

The Araba hitmaker is well known in the music industry as one of the few who held on to highlife genre in the early 2000s.

He stated that in this 21st century, Ghanaians have totally imitated the Nigerian way of doing highlife.

“It’s not as if the Nigerian way of doing music is bad but if Ghanaians are adopting it, we should have a feel of highlife in it,” he suggested.

Naa Agyeman says he is disappointed in the kind of highlife music produced in the 21st century.

Although the veteran artiste admits that civilisation has played a key role in the kind of music being produced, he insists that having the original Ghanaian rhythm in every highlife songs will help preserve the unique identity.

“The rhythm and singing of the kids does not help all Ghanaians, it only helps when you go outside the country,” he added.

He further explained the reason for his choice of lyrics in his music as a way of appealing to all age groups.

According to him, he imagines a young lady in front of him when penning his lyrics and also uses happenings around him to craft messages.

He alleged that he was asked to pay for Ghana Music Award, but after he refused to kowtow to the demands, his work was removed from the list of songs up for an award that year.

Naa Agyeman said that the organisers gave an excuse of the song having profane lyrics.

“Music has brought me money even though not all albums generate money, some are used as a stepping stone for some,” the rapper stated.

He says he never regrets doing music because it is God’s gift to him and that music runs in the family.

He revealed in the interview that he will soon release an album in which he collaborated with Kwabena Kwabena and Akwaboa.

Naa Agyeman recently collaborated with Guru on the single titled ‘No Credit’.

The song blends the styles of the two musicians creating a fun ear-catchy song. The duo speak on two topical issues – love and money.

Naa Agyeman has however urged his fellow artistes to invest more in their lyrics and not to put money first when doing music even though money is what they use in producing the music.