Scientists at the University of Ghana have identified the gene that causes inherited deafness.

State-owned Daily Graphic newspaper reports that the scientists at the West African Centre for Cell Biology of Infectious Pathogens (WACCBIP) at the university collected samples from children in all 11 schools for the deaf across the country.

“The findings also indicated a 1.4 per cent carrier frequency rate among 145 healthy Ghanaians who were screened randomly, suggesting that among every 145 Ghanaians, two are likely to carry the defective gene that can be passed on to their children,” the newspaper reports.

The gene has been christened ‘Gap junction beta 2 (GJB2)’ or Connexin 26, and is said to direct the production of proteins that make up part of the inner ear.

“Being recessive, carriers of the gene, who inherit just one defective copy from a parent, have normal hearing. But those with two flawed copies, one from each parent, have hearing loss that can range from moderate to profound.

“The Ghana-led research is one of the several advances that will make it possible to offer genetic testing in the country to help people determine why their families are hearing impaired and also to check the spread of the gene,” the paper explained.

A Doctor of Philosophy (PhD) candidate, Mr Mawuli Adade, conducted the field research which was approved by the Noguchi Memorial Institute for Medical Research Ethical Review Board and the Special Education Unit of the Ghana Education Service.

It was supervised by a biochemist, Professor Gordon A. Awandare, and two experts in Audiology at the Korle Bu Teaching Hospital — Prof. Ambroise Wankam and Prof. Geoffrey Amedofu.

The study results, which were published in the medical journal, Frontiers Journal, last month, showed that 1,104 medical reports of the students in the 11 schools for the deaf were reviewed to identify selected participants.

Ninety-seven families with at least two members living with hearing impairment and 166 individuals who did not have any family history of the condition were then identified.

A detailed family history was obtained from all participants and consent forms were signed prior to enrolment.

The record of each participant was reviewed by a medical geneticist and an ear, nose and throat (ENT) specialist and blood samples taken from all available family members. DNA was also extracted from their blood samples.

The researchers looked for mutation (alterations in the structure) of the connexin 26 gene, which was earlier identified in 2001 and linked to 50 per cent or more cases of inherited deafness in the 11 schools for the deaf in Ghana and the Adamorobe village near Aburi, where inherited deafness was estimated above the global average.

Next, the scientists looked for the GJB2 and GJB6 variants in the blood samples of the 97 families with the hearing impairment and the 166 single cases identified. 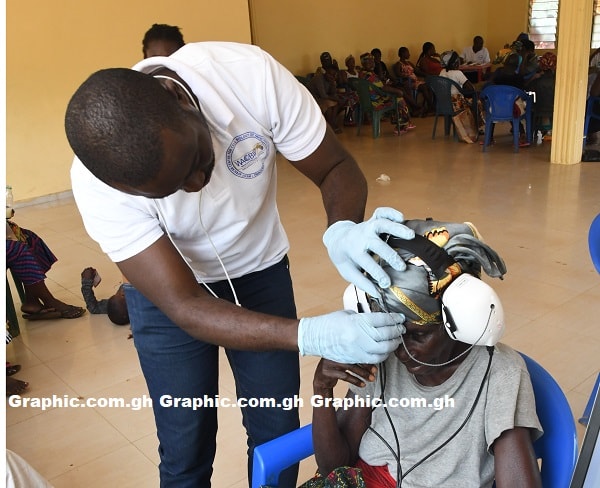 Photo: One of the hearing-impaired persons being screened. Picture: GABRIEL AHIABOR

Although the GJB6 gene, which was found globally,  was absent in the Ghanaian cases, the GJB2-R143W gene was found to have accounted for over a quarter of familial hearing impairment cases among the groups that were screened.

That suggested that one out of every four families with deafness would have the “gene-mistake”.

Therefore, the number of hearing-impaired patients in Ghana could silently increase if this gene was not checked, the study indicated.

Mr Adade, who conducted the field research, told the Daily Graphic that the study had demonstrated that genetics was a major contributory factor to hearing impairment in the country.

He said the study for the first time established the carrier rate of GJB2 variants among healthy populations which indicated what accounted for an increase in the percentage of GJB2-patients in the country.

According to him, the team was currently employing next-generation sequencing techniques to identify other gene variants (“gene-mistakes”) associated with hearing impairment in Ghana to establish a clearer and a more precise picture of how to stop the phenomenon or help check its spread.

“Ultimately, we hope to develop appropriate and cost-effective diagnostic approaches for newborn genetic screening to contribute to the reduction of the burden of the condition in Ghana,” he said.