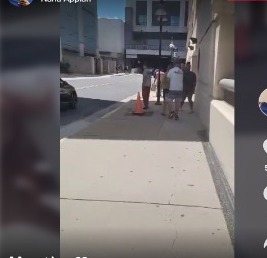 On Saturday, June 18, gunshots were heard inside the Tysons Corner Center mall in Virginia leaving patrons panicked and running to safe places to hide.

In a report by The Washington Post, Fairfax Police who were called to the mall revealed that there was no active shooter involved.

They explained that a fight broke out and one person fired a gun sending panic across the mall.

Amidst all this, it has come to light that a Ghanaian woman was also caught in the shooting.

In a video that has gone viral, the lady is heard screaming while she runs towards the underground parking lot with many others for safety.

“Everybody is running. I wasn’t even done eating and I have not paid for it. America might not be safe any longer,” she is heard saying while filming the chaotic environment amid police reinforcement.

It is unclear exactly who she is, but the video has gone viral attracting a myriad of reactions from Ghanaians about the safety of its citizens in the US.

Meanwhile, the police revealed that three people were taken to local hospitals with injuries received while fleeing, but no one was injured from gunfire.

Also, officials didn’t announce any immediate arrests, police said detectives are reviewing videos from hundreds of different angles and talking with many witnesses.

However, the mass shooting incidents which took place at a grocery store in Buffalo and at an elementary school in Uvalde, Texas, has had people on edge.

Another report by Washington Post indicates that there have already been more than 250 mass shootings this year in the United States.

Thirty-eight have taken place since the rampage at an elementary school in Uvalde, Texas, left 19 children and two teachers dead on May 24. Just this past weekend, mass shootings in multiple cities killed 11 and wounded more than 60.