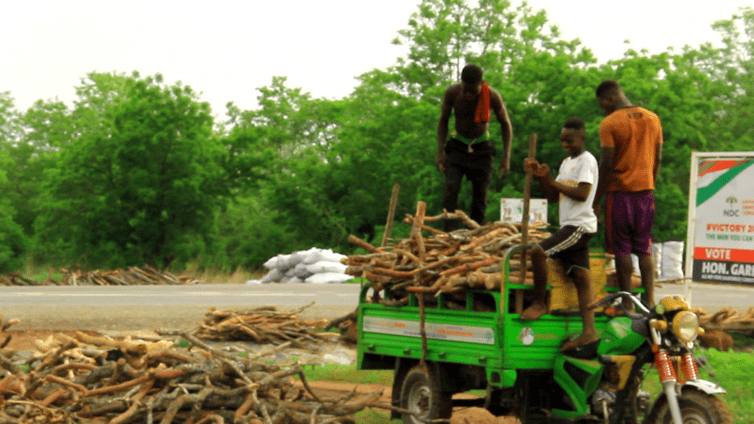 For seven years, Nafisah Wahab and Nuriya Zubaida worked in Ghana’s capital city, Accra, as head porters – carrying luggage to fend for themselves.

But they returned home when they realized that the capital city is not a suitable venue to survive as young women.

Both in their mid-twenties, they now live in a small village called Sumpini and Kojope in the Savannah region, where everyone depends on shea fruits for survival.

Like Nafisah and Nuriya, almost everyone in the village harvests ripe fruits for sale to earn an income. It is how they have sustained their children’s education and maintained their families.

“I used to pick shea nut, but it is no longer there,” said Nafisah. At the peak of the season, she and others could make GH₵100 per day. They earned more when they gathered the shea nut for a week and processed them.

“We could make GH₵1000 to solve our challenges, but because it is no more, we had to move to the city,” Nuriya said.
They are just two of hundreds of young women who migrate to the cities every year hoping to make a better living.

Life in the city

In 2011, Nafisah had to move to Accra because she could not earn enough in her village. The shea trees were not fruiting for them to harvest.

Nafisah lived in Accra for seven years, 654km away from home. Working in the capital city by carrying people’s luggage was not an easy task. Nevertheless, she defied the odds, bad weather and the worst treatment to raise money for the family back home.

But she had to give up and return home in 2018 because life was too tough.
Nafisah is married and has three children. However, only one of her children goes to school because she has no work. She herself left primary school to harvest shea nuts to sell.

As for Nuriya, she returned from Accra to marry. She has two daughters, but neither of them is in school.
Many young women and girls have left for cities such as Kumasi and Accra in search of sustainable livelihoods. While they continue to search for non-existent jobs, many end up pregnant against their will.

Azara Solia, who is in her late 50s, said that two of her children left for Accra and Kumasi. The family used to farm, but Azara says they can’t farm anymore because livestock would destroy their farms.

Like Nafisah and Nuriya, almost all the head porters found in the main cities of Ghana are from the northern parts of the country. Many of them have lost their main source of livelihood back home, and there is no other way to fend for themselves.

According to Jaksally Development Organization, a non-profit organization that works to empower women, youth and rural communities in Ghana, about 60% of young women migrate to the southern part of the country, especially during the dry season, to look for jobs.

“Truly, the shea used to be abundant here, but now, there are just a handful. Our children eat from these trees. The way the number of trees keeps reducing is alarming,” said 52-year-old Mohammed Yakubu, who has lived in Sumpini for many years.

He was also among those who harvested and gathered shea nuts and sold them for family upkeep.

The shea tree can bear fruit for many years. The fruit tree is a source of employment for hundreds of thousands of people, especially women. To generate income, the women go into the bush to harvest the nuts, which are directly sold to processors or are processed by extracting the butter from the nuts and then sold to other traders.

It also serves as a food source. Shea butter is extracted from the nuts and used as cooking oil to prepare various types of foods.

The lifespan of the shea tree

The shea tree grows mostly in the wild. It grows over the entire northern part of Ghana, covering over 77,670 square kilometers.
Local people say no one owns the shea tree because it germinates and grows on its own. It has no natural enemies such as pests.

After the first five years of germination and growth, it develops slowly and takes about 30 years to reach maturity. Shea trees can live for about three centuries, bearing fruit for up to 200 years.

Source of food, raw material for industry and foreign exchange

Research has shown that shea trees have a great, untapped ability to produce copious quantities of sap that are a significant source of raw material for the gum and rubber industry.

According to research, the mature fruit contains about 61% fat, which, once extracted, is edible and can be used for medicinal and industrial purposes.

Shea butter has a fat composition similar to cocoa butter and is also used as a substitute for lard or margarine because it makes highly pliable dough.

It is also used to produce soap and candles.

Once the oil is extracted, the residue is used as an excellent fuel and mixed with mud for plastering traditional mud huts.

It is estimated that Ghana was home to about 9.4 million shea trees, which could potentially yield one hundred tons of shea nuts worth about 100 million dollars per year.

But human activities and bad weather have affected the tree’s life cycle and productivity.

“Now the shea trees no longer bear nuts. For women in this community, we depend largely on the shea fruits to fend for ourselves and our children who are in school. But now we have to depend on firewood,” said Azara.

Demand for lumber and fuel from the tree has increased. Among other things, residents of Sumpini and Kojope are now resorting to cutting down shea trees for firewood.

“We suffer because we want to feed our families,” said 50-year-old Fuseini Haruna.

“The commercialization of the charcoal business is another factor. The shea tree gives them good charcoal,” Seidu said. Both men and women are now competing on who gets the lion’s share of the bush. On average, a truck full of firewood is sold at GH¢300, whereas just a bag of charcoal goes for GH¢20.

It is estimated that more than 50% of the shea trees in the savannah ecological zone have been cut down for charcoal.

“Most of the trees are aged, that’s why they are not fruiting,” said Julius Yeboah, head of the Cocoa Research Institute of Ghana at Bole.

For their part, the women don’t know why the trees aren’t bearing much fruit anymore but believe hunters who burn the bush are responsible. Indiscriminate bushfires also destroy the Shea trees at the flowering stage.
Climatic effects
Members of these communities know that trees help clean the air, filter the water, and provide habitat to over 80% of the world’s terrestrial biodiversity.

They also know that trees absorb harmful carbon from the atmosphere and are key ingredients in 25% of all medicines.
But they are left with no choice. Under extreme conditions, they are compelled to fell the shea trees they depend on.
Solia Atika, aged 18, is a student of the Fufolso Senior High School.

Atika also helps her grandmother sell firewood. “We don’t like to cut down trees, but there is nothing here to do,” she added.

The entire community had shea trees, but now as weather patterns have changed, their situation has worsened. There are fewer rains, and without the protective barrier of the trees, storms wreak havoc in the rainy season, destroying homes.

“Now there is a lot of heat, and when there is a storm, our lives are always in danger. When we had trees around our homes, things were different,” said 22-year old Salifu Abdul-Hamid.

Kojope is becoming drier and hotter. Residents who have to endure the heat all day sometimes have to visit the health facilities for medications. The houses there can be counted without a struggle.

According to data from the Ghana Meteorological Agency, temperatures are generally high all year round. The hottest month is March, with a minimum of 21°C at night and a maximum of 42°C during the day. The average monthly temperature is 30°C. Mean annual rainfall ranges from 930mm to 1200mm.

According to Global Forest Watch, Ghana had 7 million hectares of natural forest, which accounted for over 30% of its land area in 2010. In 2020 alone, it lost 136,000 hectares of natural forest, equivalent to 82.2Mt of CO₂ emissions.
The report also says the country lost 101kha of humid primary forest, making up 8.0% of its total tree cover loss between 2002 to 2020. Ghana’s total area of humid primary forest fell by 9.3% within the same period.

Bona Kyiire says the number of animals in the park has increased, especially elephants and other bigger animals.
This means more animals are relocating to safer places because of environmental destruction.

“Once the depletion happens out there, the next focus will be the national park,” he says. Sumpini and Kojope are about 68 km away from the Mole National Park – less than an hour’s drive.

Mr Kyiire says animals could travel far more than that distance to the park.

Chief of Kojope, Attaboy Salia, says they have had meetings to educate residents on the dangers of felling trees but to no avail.

“Now we have insects and crawling creatures that previously lived on trees crawl in our homes because there are no more trees,” he said.

“We were previously summoned as chiefs and told to stop our people from cutting trees and burning charcoal, which I conveyed to my people.
But they have no source of livelihood. The Fulani cattle destroy their farms and leave them with nothing at the end of the farming season,” said Chief Salia.

The shea tree fruits once a year between May and August but provides numerous benefits to local communities.

Seidu of the Jaksally Development Organization wants traditional and environmental laws reinforced to protect the trees and invocations against those who cut down the trees.

“These things worked in the past,” he says.

According to him, people were fined or expelled from communities because they cut down trees.

“Traditional rules and sanctions of land priests need to be revisited,” he noted.

Chief of Kojope, Attaboy Salia, says trees planted in the past didn’t survive and they have lost hope of planting more in the communities.

Meanwhile, Dr Yeboah is working on grafting to hasten the fruiting period of the shea tree from 15 years to 4 years. He has developed some demonstration parklands, but community members are unwilling to support the program.
Authorities at the Mole National Park are also seeking funding to introduce alternative livelihood programs for the communities.

An NGO, TalkTrees, together with the people of Kojope and Sumpini, have planted selected high-yielding mango seedlings and other shade trees as windbreakers in the communities, and to pilot another source of income in the next few years.

“Once they [the community] have trees that benefit them, our trees, animals, birds and environment will be a lot safer,” says Jonathan Adawen Kojo, who leads the project.