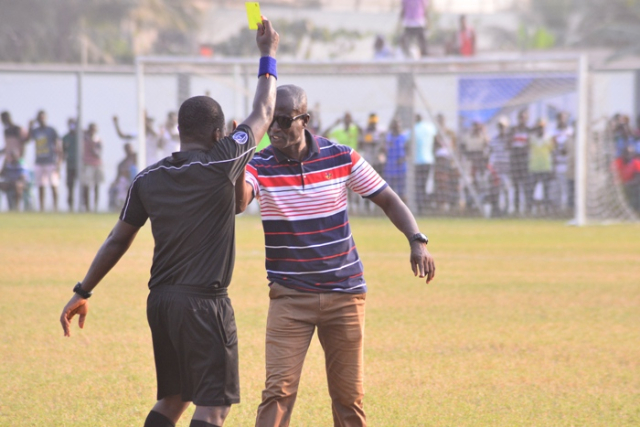 The incident happened at Akoon Park in Tarkwa on Wednesday.

According to Ghanasoccernet.com, Danson together with his backroom staff, run onto the pitch to confront the referee Wiseman Ghansah after Medeama scored in injury-time to win the match 1-0.

He claimed the five minutes added on time had elapsed when Kwesi Donsu scored the goal.

It took the intervention of the security detail to prevent a physical attack on the centre referee. Danso was shown a yellow card by the referee.

”Our defeat was dangerously planned. We scored a beautiful free kick in the first half but the referee denied it,” Danso told reporters after the match.

“How can you show five minutes of added time and we ended up playing 15 minutes. It’s very sad.

” We can’t bring back the love with such officiating. The referees had already planned our defeat with them before the game. Everyone in the stadium saw what happened.

“I’m appealing to the GFA to get a clip of the game and watch it. We were cheated.”

The Ghana Football Association Disciplinary Committee could sanction the coach for his actions.

DISCLAIMER: The Views, Comments, Opinions, Contributions and Statements made by Readers and Contributors on this platform do not necessarily represent the views or policy of Multimedia Group Limited.
Tags:
Bechem United
GHPL