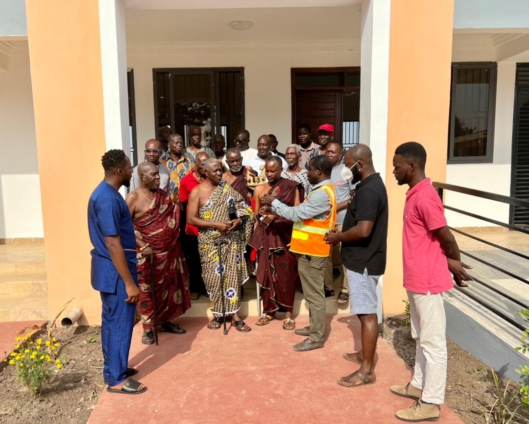 The Ghana National Petroleum Corporation (GNPC), through its Foundation, has completed and handed over a newly constructed Community Resource Centre to the chiefs and people of Kpando in the Volta Region.

A brief ceremony to conduct final inspection and handing over of the facility was honoured with the presence of the chiefs and elders of the Akpini Traditional Area who also represented the Paramount Chief,  Okpekpewoekpe Akpinifia Dagadu IX.

Mr. Benedict Adde, Team Lead of the Environment and Social Amenities Unit of the GNPC Foundation, expressed his delight over the completion of the project which he said would offer the people of Kpando and surrounding towns a befitting space to share information, galvanise and provide support to community members for the development of the area.

He said the GNPC, for all it is known for is also through the Foundation’s work, strategically positioned as a development partner to communities across the country and will continue to offer assistance which are consistent with its mission to positively impact lives and people.

The Tsakpe Deveme, Togbui Dake IV, on behalf of the paramount chief and people of Kpando thanked GNPC for the gesture and assured that the facility will be put to its intended use to derive the expected benefits for the people of the area.

The one storey resource centre has two conference/meeting rooms, two offices, eight washrooms, a kitchenette, one storeroom and other ancillary facilities.

DISCLAIMER: The Views, Comments, Opinions, Contributions and Statements made by Readers and Contributors on this platform do not necessarily represent the views or policy of Multimedia Group Limited.
Tags:
GNPC
GNPC Foundation
Resource centre