GOIL profits up by 29% in 2019, pays dividend to shareholders 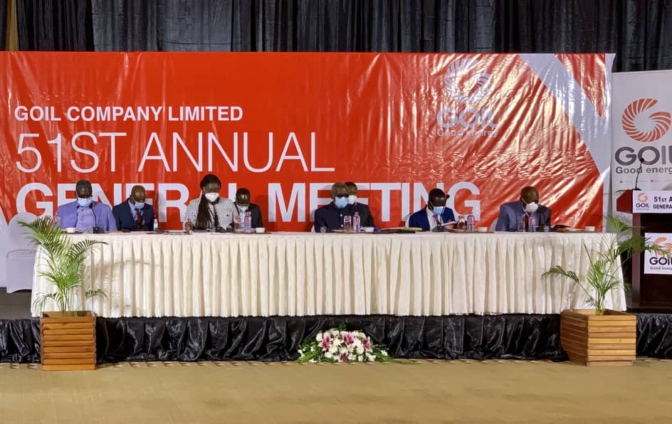 GOIL Company Limited has recorded an impressive performance in 2019, with profits increasing by 29 per cent and sales growing by 9.66 per cent.

Addressing shareholders at the company’s 51st Annual General Meeting held virtually and streamed live by video link to all shareholders in Accra, Board Chairman Kwamena Bartels disclosed that GOIL’s growth in sales volume of fuel was higher than that of the Industry for the first time in many years.

He told shareholders, the main drivers behind the growth, were not the sale of the traditional products, Diesel XP and Super XP, which traditionally form about 90% of the volume of sales, but rather the sale of mining diesel, bunkering and aviation fuel.

Explaining the reason for the dividend declaration, he said the company has embarked on projects that have the potential to yield higher gains in the future and therefore decided to retain a considerable amount of the earnings per share to help finance the projects.

The Group CEO/Managing Director of the Company, Kwame Osei-Prempeh assured shareholders that the future prospects of the company remained bright, with the hope that as the world gradually gets rid of COVID-19, the sale of non-traditional products would continue to increase overall sales as experienced during the year 2019.

He told shareholders the Bitumen project embarked upon by the company was ongoing and would be operational during the year 2021.

Work regarding the construction of  a Gas Cylinder Refilling plant has also started in earnest and the company hopes to complete the project by 2021.

Hundreds of Shareholders across the country and other parts of the world, joined the AGM electronically, participated and voted on all the resolutions passed at the Virtual AGM.

They included changing the name of the company from GOIL Company limited to GOIL Company Limited PLC in compliance with the new companies Act, (Act 992) and the re-election of three Directors who were retiring by rotation.

DISCLAIMER: The Views, Comments, Opinions, Contributions and Statements made by Readers and Contributors on this platform do not necessarily represent the views or policy of Multimedia Group Limited.
Tags:
dividends
Goil Ghana Limited
Shareholders