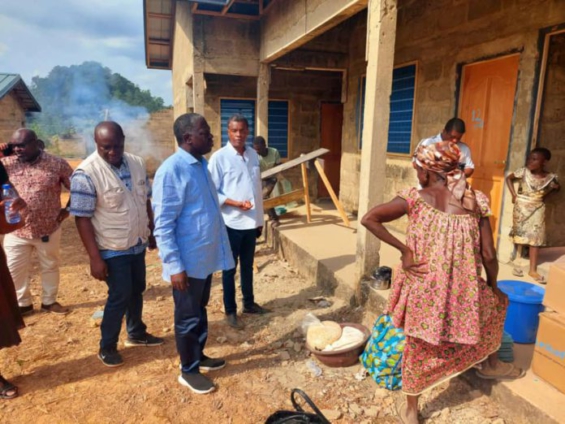 Government through the Ministry of Lands and Natural Resources has commenced relocation of victims of the Appiatse explosion from the tents into newly constructed buildings.

Addressing the media on his unannounced visit to Appiatse on Tuesday, Deputy Minister for Lands and Natural Resources, Benito Owusu-Bio said 800 victims of 125 households are being moved into the completed rooms.

“Our visit here today was just to ensure that all the necessary arrangements are put in place for a smooth transition on 4th May, 2022 on which we will come with the Hon. Samuel A. Jinapor to officially handover the buildings to the people.

“I’m happy with what I’ve seen today, most of them have moved in and gradually we hope that all will move in before we return on Wednesday,” he said.

Government has been working on buildings intended for the displaced victims since the explosion at Appiaste on January 20.

Benito Owusu-Bio, said five more structures have been added to the initial 32, bringing the numbers to a total of 37 structures, which he said have all been completely refurbished to temporarily shelter all the displaced people of Appiatse.

He assured that having completed the temporary structures, plans are far advanced to commence work on the main Appiatse site, adding that tender has been opened and the committee is almost done for work to begin soon.

The Deputy Minister, who is also the Chairman of the Appiatse Reconstruction Committee, in his submission, appreciated the support of his team and the Municipal Chief Executive, Dr. Isaac Dasmani, and also thanked Ghanaians for their generosity towards the Support Fund and the people of Appiatse.

The temporary structures were given to the Ministry by the Future Global Resources Company (FGR), to aid the government house the people of Appiatse temporarily, as it gathers funds to reconstruct the Appiatse township which was razed by an explosion in January.