Government does not seem to know the level of poverty in Ghana – Catholic Bishops’ Conference - MyJoyOnline.com 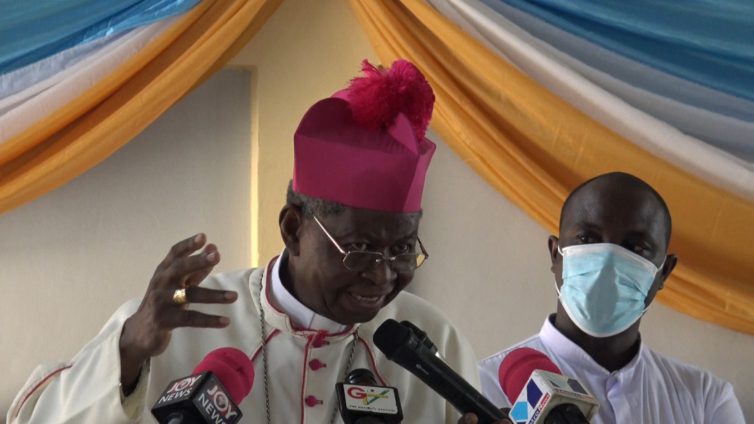 President of the Ghana Catholic Bishops’ Conference, Most Reverend Philip Naameh, has lamented the perceived level of corruption perpetrated by political actors.

Speaking at the plenary session of the Ghana Catholic Bishops’ Conference in Wa on Monday, Most Rev Naameh said corruption is having a toll on the national economy, thereby increasing Ghana’s poverty situation.

He said President Akufo-Addo has defaulted in honouring his promise to protect the public purse.

“Though poverty stares us in the face, it appears lost to those with power,” Most Rev. Naameh said.

It has been 21 years since the last Catholic Bishops’ Conference was held in the Upper West Region.

For a Region where almost half of the population belongs to the Catholic faith, worshippers see it as their religion coming home after two decades.

Ironically, the majority of the people in the region are living below the poverty line.

And among the wide range of issues that the President of the Bishops’ Conference, Most Reverend Philip Naameh, spoke about, was the excruciating hardship and endemic poverty that the people are wallowing in.

He noted that although the Covid-19 pandemic is a global crisis, he believed the disease is indiscriminate in its effect on the world economy.

He observed that relatively developing countries like Ghana have been the worse hit, with multi-sectoral effects.

He, therefore, called on the government and the church to prioritise the empowerment of the youth and women by offering them employable skills.

Touching on LGBTQ+ activities, the Archbishop called on the citizenry to support the Promotion of Proper Human Sexual Rights and Ghanaian Family Values Bill 2021.

“I wish to appeal to all well-meaning Ghanaians to support this bill by impacting or influencing our Parliamentarians to vote against this cancer or virus called LGBTQ+,” he said.

The over 30 Archbishops and Bishops earlier rolled out of town and headed to Jirapa, considered the Catholic Church’s cradle and birthplace in the Region.

They visited the grave and prayed for the departed soul of the first Chief of Jirapa, Naa Salifu Ganaa Ansolee I, who was a Muslim but ceded parts of his land to the Catholic missionaries to begin to practice their faith.