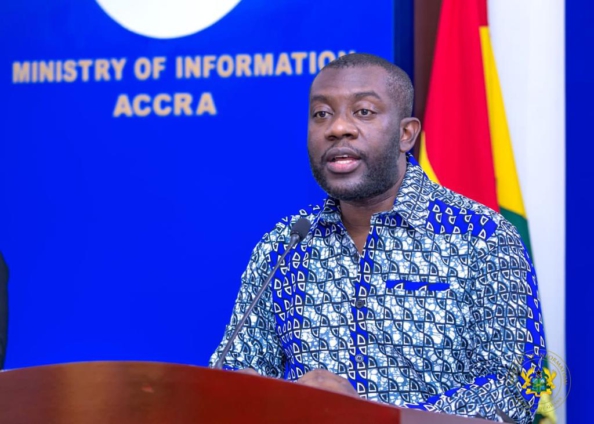 The Minister for Information, Kojo Oppong Nkrumah, says the government is engaging the telecommunications companies to reduce their charges on electronic transactions.

According to him, this reduction is to help the government maintain the 1.75% levy and reduce the impact of the tax on the ordinary Ghanaian.

Speaking to JoyNews’ Kwesi Parker Wilson, Mr. Nkrumah said “today, the Telcos are charging about 2%, so, if the government introduces an additional 1.75% (e-levy) the cumulative effect is 3.75% on the Ghanaian.”

However, in other to ensure Ghanaians are not burdened with the tax, the government has been exploring ways to reduce the cumulative effect, he noted.

Mr. Nkrumah said “the government has been engaging with the Telcos. So if the telcos reduce their 2% and even if the government stays at 1.75% that means the state is assured of the revenues of the 1.75% and the net effect on the Ghanaian will still be low.”

His comment follows weeks-long deliberations on the government’s proposal of e-levy, expected to be charged on electronic transactions.

Since Mr. Ofori-Atta announced the government’s decision to introduce a 1.75% levy on all electronic transactions effective January 1, 2022, stakeholders have been divided on the initiative.

Although the government has argued that it is an innovative way to generate revenue, scores of citizens have expressed varied sentiments on its appropriateness.

Meanwhile, the Minority in Parliament, according to Minority Chief Whip, Mohammed Mubarak Muntaka, is unwavering in its position to reject the imposition of the e-levy by government.

However, Mr. Nkrumah believes that the levy will aid the government to mobilise revenue to deliver on its commitment to the Ghanaian people.

He said that the commitment to fulfil the promises made to Ghanaians should not be met with debt only but with domestic revenues.

“So these are some of the engagements we have been doing behind the scenes to ensure that government will still get the revenue but in the end, the impact on the Ghanaian is watered down. We are very optimistic that we will get to a positive conclusion.”Mr. Nkrumah added.

DISCLAIMER: The Views, Comments, Opinions, Contributions and Statements made by Readers and Contributors on this platform do not necessarily represent the views or policy of Multimedia Group Limited.
Tags:
E-Levy
Kojo Oppong Nkrumah
Telcos