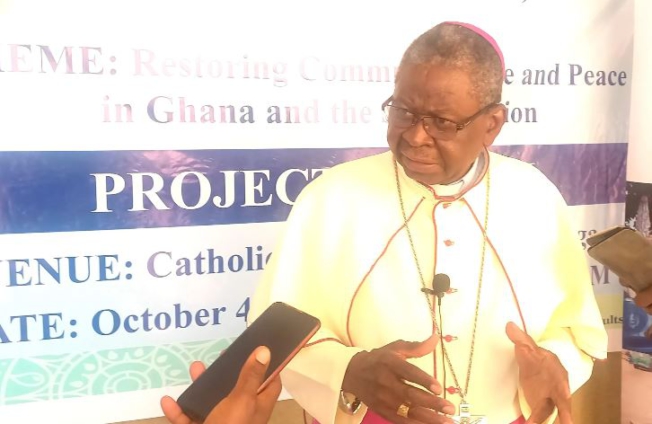 Most Reverend Philip Naameh, the President of the Ghana Catholic Bishops’ Conference, has called on the government to address the rising poverty levels and discrimination in the distribution of state resources to avoid insurgency.

He said: “Poverty and rising inequalities have fostered a culture of hopelessness in our Ghanaian communities, and this has contributed to the recruitment of many of the youth into violent activities, putting the country at risk of external attacks.”

Most Rev Naameh underscored the urgent need for government to distribute development fairly among all groups to avoid widespread perception of discrimination and exclusion among the citizens, to strengthen the peace and social cohesion.

Speaking at the launch of the Sahel Peace Initiative (SPI) Phase II at Bolgatanga, in the Upper East Region, Most Reverend Naameh who is also the Metropolitan Archbishop of Tamale Catholic Diocese, noted that the high unemployment, corruption and unequal access to capital leading to unrest in some Sahelian countries also affected Ghana.

He said there had not been a comprehensive agenda to create enabling environment, particularly for the youth to thrive and that had made them vulnerable to attempts by terrorists’ groups to be recruited to cause instability.

“Once we create this vulnerability for our youth and many of our citizens, then, we invite the conflict even without intending it.

“Evidence of this is the reported incidents of activities of extremists in some neighbouring countries like Mali, Niger, Burkina Faso and along some border communities in Northern Ghana, giving widespread perception that governments in the Sahel are failing to provide critical social services,” he stressed.

Most Rev Naameh said it was “a big scandal” for majority of the citizens to be discriminated against when it came to the distribution of development projects, adding that “leaders must be committed to the common good of all Ghanaians.”

“While the majority are poor and struggling to get one meal a day, others can afford everything from the same Ghana, even primary school, they will send their children to Europe and America and this a big scandal which I call on those who manage our resources to address and do so immediately.

“If there is hardship, let everybody living in Ghana experience it but if some are excluded from it and take a life which approaches more of a wealthy country, then I will say that it is not right,” he said.

The archbishop commended government for efforts being made in the security and said it needed to make security presence visible in communities in Northern Ghana, especially those bordered by the countries which had experienced violence, to ensure that the country was protected.

The SPI is a peace project being rolled out by the Catholic Church with funding from the Catholic Relief Services (CRS), to create awareness on threats of terrorism, promote social cohesion through advocacy and build the resilience of communities affected by conflicts in the Subregion.

It would also work with relevant stakeholders to find mitigating measures to resolve conflicts through mediation and dialogue and respond to humanitarian needs of people affected by the threats and conflicts.

The project is being coordinated by the National Catholic Secretariat (NCS) and implemented by the Navrongo-Bolgatanga Catholic Diocesan Development Organisation (NABOCADO), a faith development organization.

Mr. Thomas Awiapo, the Executive Secretary, NCS, said the project which would involve women in the peacebuilding processes would build the capacity of communities especially the youth to enable them to identify early warning signals of activities of terrorism and help to combat them.

DISCLAIMER: The Views, Comments, Opinions, Contributions and Statements made by Readers and Contributors on this platform do not necessarily represent the views or policy of Multimedia Group Limited.
Tags:
Catholic Relief Services
Ghana Catholic Bishops’ Conference