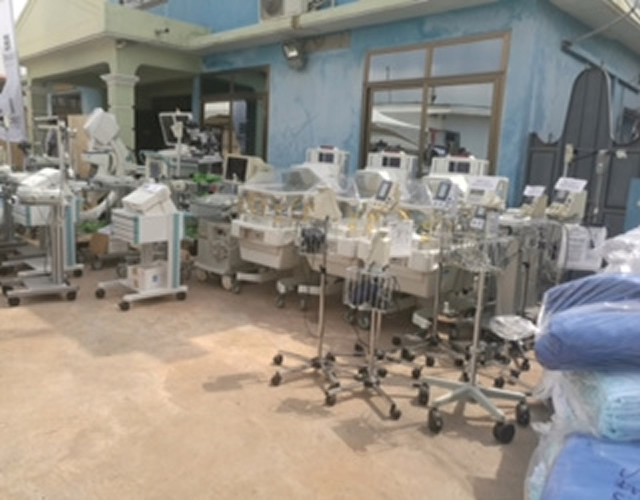 He was speaking with Adom News at the ceremony where Seaweld donated hundreds of thousands of dollars worth of medical equipment to 22 hospitals and clinics in the country.

The equipment came from Geneva Cantonal University Hospital through the effort of Gertrude Nimako-Boateng, a Ghanaian International Trade Lawyer living in Switzerland.

Alfred Adagbedu said Seaweld had to pay over GHC50,000 in customs duties to bring in the items even though they are for charity.

“There are lots of items waiting abroad to be shipped into the country for charity purposes but because of the high import duty, we are unable to bring them,” he said.

The Seaweld Boss said he is aware some people have abused the tax waivers on good imported for charity and they use such items for their private benefit, but he believes government can vet such imports properly and give waivers to genuine ones.

Gertrude Nimako-Boateng also told Adom News she chanced on the items while she was on admission at the Cantonal University Hospital in Geneva.

“I first brought in several wheel chairs for Saint Joseph’s Hospital and then these items worth almost a millions dollars came in with the support of Seaweld, which paid for the shipment and import duties,” she said.

She expressed her profound gratitude to the Cantonal University Hospital, saying they were kind enough to include some new items and have even told her of some more beds ready for shipment to Ghana.

“When I return I will arrange and bring those items to Ghana as well, if only Seaweld would be willing to pay for the import like they did,” she said.

Meanwhile, representatives of some of the beneficiary hospitals also told Adom News the equipment will solve their dire needs because “these are very important but very expensive equipment and our internally generated funds are not enough to buy them.”

Dr. Amenuveve from the Legon Hospital hospital was full of gratitude to Seaweld and Madam Gertrude Nimako-Boateng for the gesture, saying that the equipment will save the beneficiary hospitals loads of money and also help them to save more lives.

A representative of La General Hospital said the CTG Machines, in particular, will help them a lot because they had often referred patients to other hospitals to go do CTG but now that they have one, it will save them the hustle.

Finance Director at UQ Specialist Medical Services in Takoradi, Linda Nana Donkor, said some of the equipment they are getting for free from Seaweld are equipment they had needed for a long time but did not have the money to import.