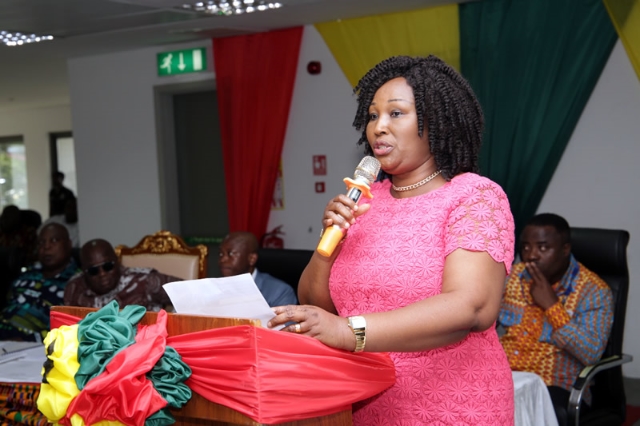 The Ghana Ports and Harbours Authority says it has observed inconsistencies in some recent statements, publications and commentaries in the public space which seeks to suggest that the Port Authority agreed for its private terminal operating partner Meridian Port Services (MPS) to increase, its tariff as a compromise to allow the latter cede 20% retention of container cargo volumes to the former.

Mrs. Esther Gyebi-Donkor, General Manager, Marketing and Corporate Affairs of GPHA asserted that, the Authority observed with disappointment a recent statement released by the Importers and Exporters Association of Ghana and published by some media outlets, contained inaccuracies including the fact that, there has been an agreement in Dubai between “Ghana Shippers Authority (GSA), Ghana Ports and Harbours Authority (GPHA) and Meridian Port Services (MPS)” and described that alleged agreement “as a scam set up to tax shippers through dubious means”.

Mrs. Gyebi-Donkor revealed that undeniably, GPHA and its partner MPS has had a recent business engagement in Dubai, but it must be placed on record that the said meeting did not include the Ghana Shippers Authority (GSA) as alleged by the aforementioned organization.

She also placed on record that the implementation of the tariff increment which is to take effect from 2nd December, 2019, was not a compromise for the 20% retention of container volumes by GPHA which is currently under negotiation between the two entities.

“Indeed, the said tariff increment was agreed upon by the Authority and its private partner MPS in their concession captured in a Deed of Amendment that was signed by the two institutions in June 2015”. The GPHA’s head of Marketing and Corporate Affairs affirmed.

She further stated that “the total tariff band of 20% was supposed to be staggered between 2015 to 2019, when the first phase of the Terminal 3 expansion project would have been completed. This process would have beenthe ports normal tariff increment to take care of inflation, increase in fuel  prices, electricity and other resources used by the port and terminal to provide services.

It is important to note that, inflation measured by the consumer price index CPI inched up by 15.9 points representing 7.29 percent since the last tariff review to March 2019. From the period to May 2019, the price of diesel fuels a major input into port operations, increased by 15.13 percent.

Unfortunately, the port was not able to implement tariff increases as planned until 2018. It therefore means that the rest would be executed in 2019 otherwise GPHA would be breaching the contract.” Mrs. Gyebi-Donkor explained.

She further stated that, at the time this agreement was reached between GPHA and MPS in 2015, there was no indication that GPHA will in future seek to renegotiate handling 20% of container volumes as has been portrayed in the publications.

“For the avoidance of doubt, the right of MPS to request for the increase in tariff, was agreed and accepted in the Deed of Amendment that was signed to allow MPS to build the Terminal as far back as 2015 in the first place”. In effect, Container volumes and revenue projections were made to assist in

the building of a financial model to ascertain the financial viability of the project. she reiterated.

Mrs. Gyebi-Donkor further confirmed that in recognition of the legally binding contract that existed between GPHA and MPS which justifies the collection of the tariff in question, GPHA wrote a letter to GSA to initiate stakeholder awareness of the need for the implementation of the tariff increase, far before the Dubai meeting.

Following the letter, GSA organized a series of stakeholder engagements after which one was held by both GPHA and GSA. During that meeting, stakeholders raised some key issues of concern for which they called for further reflection on the implementation of the Tariff increment.

Amongst the points raised were the concerns that:

• It was too early for the Port Authority to increase the tariff for MPS erminal 3.

• Services at the new Terminal 3 were comparatively poor

• Some charges to be fixed in foreign currencies were unacceptable.

According to her, at the forum, the Director General of GPHA, Mr. Michael Luguje emphatically explained to the stakeholders that, the then imminent tariff increment was a necessity as a result of the legal arrangement between

GPHA or Government of Ghana and MPS that cannot be compromised. Mrs. Gyebi-Donkor therefore rejected suggestions that GPHA and its sister agency, the GSA were compromised to allow MPS implement the tariff increase in order to secure a 20% retention of container volumes and described the argument as unfounded, since the two had no connection.

She averred that a recent study on charges in the Port commissioned by the Vice President of the country came out with an interesting observation. It was revealed that, although GPHA is responsible for securing resources to build and provide all the facilities and the superstructures in the Ports to make themconducive for business, it’s charges are far lower than most of the other stakeholders in the clearance chain.

She also reiterated that the Port Authority is not Government subverted and needs to operate on a sound financial model to be able to pay for the over 4,200 Ghanaians on its payroll and also pay dividends to Government.

She stated that the Port Authority is fully aware of its important role as the gateway to Trade in Ghana and invariably is responsible for about 90% of Trade Transactions and will therefore not agree to implement any measure that will jeopardize the National Economy.

Mrs. Esther Gyebi-Donkor said, GPHA will always be prepared to dialogue with all stakeholders in the interest of good corporate governance but will at all times do so with the overall national economy as its principal interest.

DISCLAIMER: The Views, Comments, Opinions, Contributions and Statements made by Readers and Contributors on this platform do not necessarily represent the views or policy of Multimedia Group Limited.
Tags:
Esther Gyebi-Donkor
GPHA
Meridian Ports Service