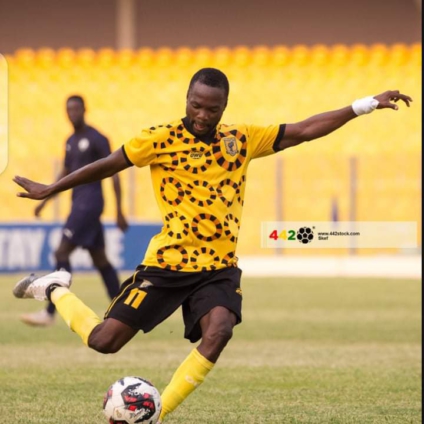 Yaw Annor scored twice as AshantiGold managed a 2-2 stalemate with Biabiani Gold Stars away from home on the final day of the Ghana Premier League.

The Kotoko striker failed to add to his tally in the last game against Accra Lions as his side played out a 1-1 draw, giving the Ashgold forward motivation before the game at the Dun’s Park.

The 24-year-old opened the scoring in the 23rd minute of the game before adding a second on the verge of halftime.

His two goals against Gold Stars saw him eclipse Etouga as the league’s top-scorer for the 2021/22 season while also ensuring he equalled Ishmael Addo’s record of 22 league goals in a single campaign, the most by any player in the Premier League.

The game in Bibiani ended 2-2 as the Miners mounted a spirited comeback after recess with a brace from Joshua Akoto.

With Annor winning the top-scorer award, the search for a first foreign winner of the prize continues with Etouga narrowly missing out on the tag.