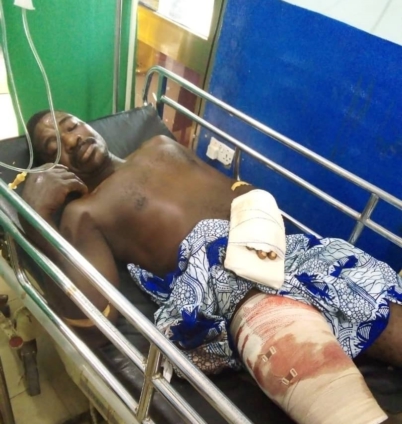 Gunmen have shot and killed a community chief volunteer on the Kyenkyenkura stretch at Ejura in the Ashanti region.

Dabilnam Paknamwa was shot in the thigh bone which eventually ruptured the main blood vessel supplying blood to the lower part of the body.

He was suspected to have died from a medical condition called embolism.

The incident which occurred on Monday, February 14, 2022, left residents and market women astonished.

The 50-year-old man was part of a team of volunteers who patrol between the Kyenkyenkura and Dromankuma to ensure market women are safe.

The stretch is a known robbery scene where many traders have received their share of terror.

Dabilnam and his colleagues volunteered to provide protection to market women and travellers, especially on Sundays and Mondays. But on Valentine’s Day, Dabilnam was the target of the gunmen.

“There was no robbery attack on that day, however, the armed men came purposely because of him, having knowledge of his duty at the time,” a source told JoyNews.

The source also says, “They guide the road every Sunday and Monday because that is the time armed robbers normally block the road.”

Dabilnam started his volunteering work in 2005 and was officially acknowledged by the Ejura Police in 2010.

Police have confirmed the incident but declined to make further comments on the killing of the chief volunteer.

Dabilnam has left behind three wives and ten children.

In September 2015, JoyNews Mahmud Mohammed-Nurudeen reported that it was agonizing for people in the municipality to go to their graves earlier through the bullet of robbers. Indications and stories of commuters who died on this road were widespread.

The account of a Fulani man who was shot and killed then, by armed men and others who met their untimely death was enough scare for the many travelers plying the road.

Most of these robbery cases happened on market days when traders have made their sales and were returning home with huge sums of money.

It was apparent the presence of police which the local people called for on numerous occasions was not felt on these days.

Though their efforts were commendable, travelers and traders were worried about the absence of police visibility and checkpoints along the road.