Head-on collision kills one, 4 others injured on Wenchi-Techiman Highway 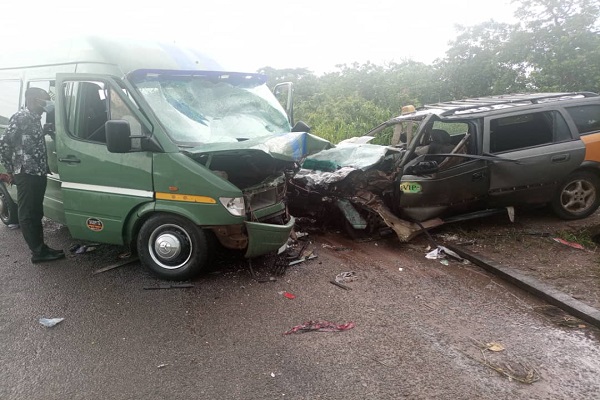 One person is reported dead, whilst four others have sustained various injuries in a head-on collision on the Wenchi-Techiman highway in the Bono region.

According to the police, a wrongful overtaken by a Sprinter bus driver caused a head-on collision resulting in the casualty.

The Wenchi Divisional Commander of the Motor Transport and Traffic Department (MTTD) of the Ghana Police, Deputy Superintendent of Police (DSP), Kofi Oduro Amponsah, said the police had a distress call on Tuesday evening indicating there an accident had occurred on the Wenchi-Techiman highway, just after the Nkonsia Police Barrier so the police hurriedly got to the scene.

DSP Oduro Amponsah explained that the Benz Sprinter bus was travelling from Kumasi to Wa and made an illegal overtaken that resulted in the crash.

“The Driver of the Benz Sprinter bus heading towards Wa attempted to overtake in a curve leading to the head-on collision with the Opel Astra which was heading towards Techiman from Wenchi,” he said.

He pointed out that four passengers are in critical condition and rushed to the Wenchi Methodist Hospital for medical attention.

According to DSP Oduro Amponsah, the body of the deceased, Francis Eleweh, aged 34, has been sent to the Wenchi Methodist Hospital morgue for preservation and autopsy.

“As we speak, the driver of the Opel Astra taxi cab cannot be found, but the police believe he will come in due time to assist with investigations”, he added.

A cousin of the deceased, Kwame Waanaa, disclosed that the late Francis Eleweh was returning to Techiman from Wenchi after finalizing preparations towards building his house but got killed in the head-on collision.

The deceased, he said, has left behind his pregnant wife and two children.