Horrifying details of why midwives refused to cut umbilical cord for lady who delivered at home - MyJoyOnline.com 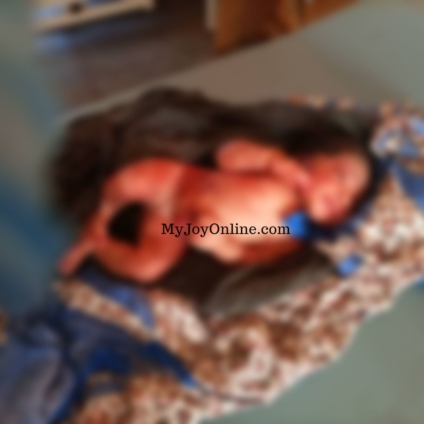 Imagine delivering a premature baby at home during the Covid-19 lockdown and walking to the nearest polyclinic with the baby’s umbilical cord uncut and being refused healthcare.

It would be awful and stressful to have such an experience, which may be due to non-availability of a vehicle to take you to your regular healthcare facility.

Fafa, a resident of Accra New Town, became a new mother in the peak of the Covid-19 outbreak in the country having given birth to an eight-month preterm baby.

She walked into a polyclinic in her area for medical attention only to be told that because she had not attended antenatal care at that facility, prior to giving birth, they could not attend to her.

The nurses and midwives on duty at the time refused to cut the umbilical cord until after an hour of verbal exchanges between them.

In addition to not helping her, she was denied access to the polyclinic’s washroom with the explanation that the tap was not flowing.

She ended up urinating on her maternity bed, a situation that cost her later – she developed infections.

She shared her healthcare experience on the Joy FM’s Super Morning Show on Thursday, July 28.

“I was pregnant and around eight months, the baby had to come and I went into labour a day after lockdown; so, there was no vehicle from 3:00am to 5:00am. I had to deliver in the house, my mum was around. So, I said since we weren’t getting a vehicle, let’s visit a polyclinic around our place, we could walk there so that they check the child since she’s eight months.

When we went [to the polyclinic], the nurses and the midwives there got angry. They said I did not go for antenatal there so why did I have to go there and all that. I was like it was an emergency, there wasn’t a vehicle at that time.

I told them I delivered in the house so they should just check the baby, check myself and cut the cord. It took us like one hour, they asked me to pay this, buy this and then do that but, after all, they didn’t even check the baby, they didn’t bath or clean her, they just left her there and then left me there.

Another midwife who was on duty in the afternoon came around; she came early. It wasn’t her time yet but she managed to treat me and after that she told me she’d take care of me in the afternoon when she returns.

In about 30 minutes, I was pressed and wanted to use the washroom. The first midwife told me the tap was not running so I couldn’t use it. I was so pressed that for one hour, I didn’t know what to do.

She wouldn’t allow me use the washroom just because I didn’t attend antenatal [there] when I was pregnant. So, at the end of the day, I had to urinate on the bed because I had a cut that was later stitched.

About two weeks later, I went to the hospital again and then I was told I had infections due to the cut and because they didn’t stitch it on time.

It took the grace of God for me to survive, although I paid for their services. It was so bad. My mother wanted to complain but I told her to forget.

Karma will deal with them,” Fafa narrated her ordeal.

The Ghana Medical Association (GMA) has stated that there is no justification for public and private health facilities to reject and turn away patients who need immediate treatment.

The Association recognised that although private outfits may choose to not accept certain patients, the deaths and complications some patients suffer due to cases of outright refusal of admission are unacceptable.

General Secretary of the Association, Dr. Titus Beyuo, explained on Joy FM’s Super Morning Show on Thursday that it is a violation for any public hospital funded by the government to ignore a patient in an emergency.