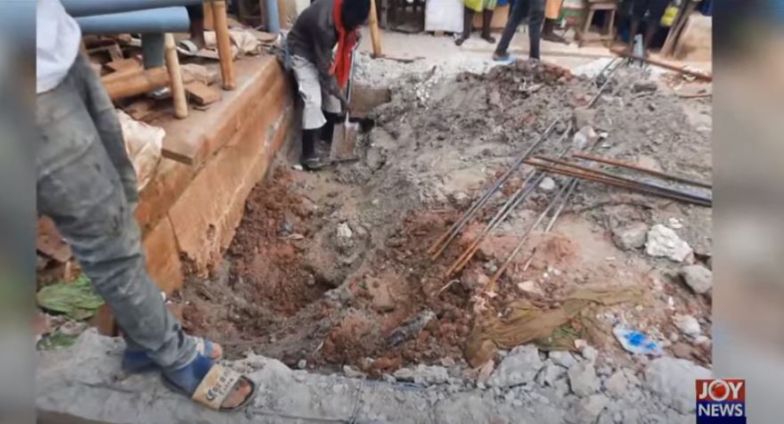 The death toll of the recent floods in Kumasi has reached six, with one child still missing.

During a tour to assess the impact of the rains, Works and Housing Minister, Francis Asenso Boakye, ordered the demolition of part of a storey building under construction on a waterway at the Asafo Market in Kumasi.

This comes after traders at the market issued a seven-day ultimatum to the Kumasi Metropolitan Assembly to stop the private developer from reconstructing the market.

According to the traders, this is the first time they are witnessing flooding, blaming the private developer for blocking the drains.

In an interview with some victim of the floods, a popular trader in dried fish, Mama Helen said “she makes efforts to dry her fish under the early afternoon sun. This is the only means to salvage her fish from rotting away.”

“It entered the box in which my fish is stored, I took a loan from the bank to buy finish and now everything is rotten. We plead with the government to help us,” she pleaded.

Parts of the market was awarded to a private develop to construct the affected parts, Movement of trucks in and out of the market resulted in the destruction of the drainage system.

The private developer is working on another project in front of the market which has affected the drains. This has got some traders worried.

“This is where the Subrin river flows, it takes water from the whole market out, now it is filled with sand so when it rains, the whole place floods,” a trader lamented.

DISCLAIMER: The Views, Comments, Opinions, Contributions and Statements made by Readers and Contributors on this platform do not necessarily represent the views or policy of Multimedia Group Limited.
Tags:
Asafo Market
demolition exercise
Flood
Francis Asenso Boakye