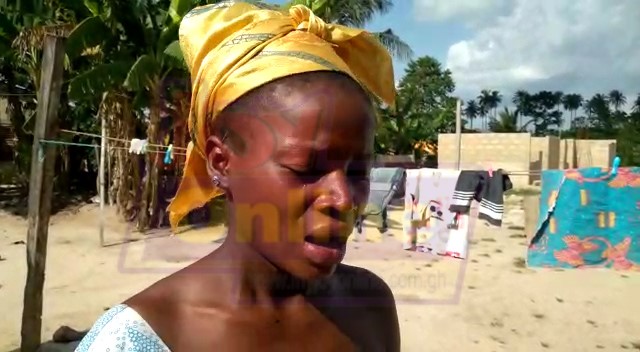 The Breman community in the Upper Denkyira West District of the Central Region was thrown into a state of mourning after a mining pit collapsed and killed three persons.

One would wonder where a 10-year-old was going to do in a galamsey pit at that ungodly hour.  His mother, Yaa Asantewaa weeps uncontrollably, as she narrates how her son took part in the galamsey activity that eventually killed him.

“Yesterday, he told me that he was going to engage in galamsey, and I told him he should not go because it is dangerous out there.  I told him to stop so we could find an alternative means of getting what we would eat.”

According to Yaa Asantewaa, the child replied, “Maa, you are a nursing mother; I need to fend for you and the child so we all could get something to eat upon my return. And so, my son left.”

She continues, “I was here when they told me that my son was dead. My son should have listened to me, so if it were even stones, we would have cooked to eat like that.”

When asked about the husband’s whereabouts, she said the husband was sick and has been taken somewhere and so there’s no help from anywhere.

She tears up again: “I have not been able to see the body of my son. This is a day I will never forget in my entire life.”

Yaa is calling for support from anyone to enable the family to survive the traumatic experience.

The assemblyman for the area, Francis Agyapong, says he was surprised to hear that some people were back to the pit to mine.

He says, as of last week, when he went patrolling the mining areas, there was no sign of anybody in the mine, and so it comes to him as a shock.

“As a result of the Operation Halt and Vanguard, everyone has disabled their machines. It was shocking to find out that some people came here to work at dawn. When I was told that some people have been here and they have been trapped, I was shocked,” he said.

Meanwhile, the bodies of the deceased have been deposited at the Dunkwa-On-Offin Government Hospital. Two of the bodies, including Yaa Asantewaa’s son, have been identified.

DISCLAIMER: The Views, Comments, Opinions, Contributions and Statements made by Readers and Contributors on this platform do not necessarily represent the views or policy of Multimedia Group Limited.
Tags:
10-year-old boy
Breman
Galamsey Pit collapse
Yaa Asantewaa