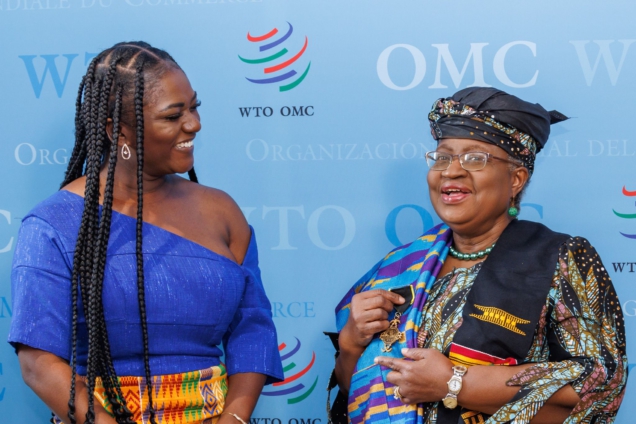 Being the first woman and first African to lead the WTO as Director-General, Okonjo-Iweala adds to a tall list of globally renowned female dignitaries and personalities who participated in the awards which was held in Accra on November 8, 2021, which she attended virtually.

Receiving the awards in person at the WTO offices in Switzerland on March 11, 2022, Okonjo-Iweala said, “I am honoured to have received the GUBA Achievement Award in the name of Nana Yaa Asantewaa, one of the fiercest women in African history who fought the British to a standstill in 1900”.

She commended GUBA for celebrating and recognizing the contribution of Black women in the diaspora and Africa, to the growth and progress of continental Africa.

Okonjo-Iweala’s participation in the event according to GUBA, is a testament to how women in high positions at all levels of society are advocating and encouraging other women to rise to similar levels, particularly in leadership.

GUBA Enterprise’s President and CEO, Dentaa Amoateng MBE at the presentation ceremony, said, “I had the honour of personally meeting and presenting Dr Ngozi Okonjo-Iweala with her Nana Yaa Asantewaa Award this week”.

“GUBA started as a dream, and meeting Dr Ngozi was significant. She exemplifies what it is to be a groundbreaker, a world changer and has demonstrated that there is no limit to what one can achieve.

“In the lead up to my birthday, I am motivated that this is just the beginning and anything is possible for women particularly Black women across the globe,” said, Dentaa Amoateng MBE.

Quoting an inspiration from Dr Okonjo-Iweala, Dentaa said; I leave you with this: “If you have a sense of purpose that drives you, then aim high and become a leader and make a room as you go”.

The 2021 GUBA Excellence Awards was dedicated to celebrating a century of the transition of Yaa Asantewaa, who was Queen Mother of Ejisu. She led the Asante army to fight the British in 1900.

The event which was on the theme, “Celebrating a Symbol of Courage and Resilience”, also recognised and celebrated the resilience of all African women in the last century.

In attendance were a host of dignitaries and personalities from various countries.

GUBA Enterprise is a social enterprise organisation dedicated to the advancement of diaspora Africans and Africans back home through various socio–economic programs and initiatives.