How Climate-smart Agric Is Changing Kparigu 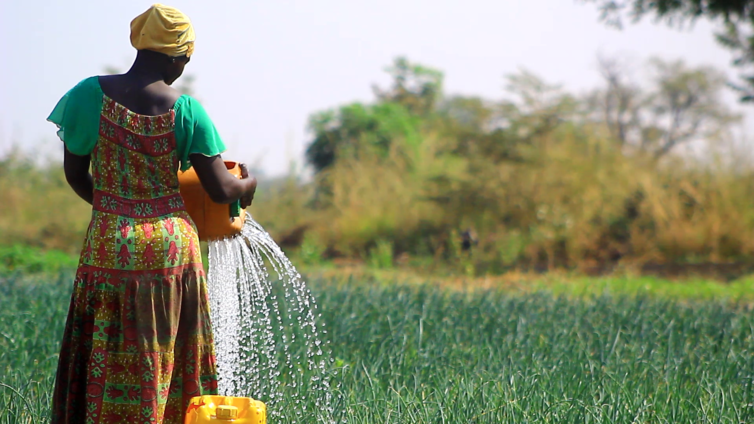 He hopes to start harvesting the 20 thousand plants soon to make good money.

A cursory observation of the crops shows they are doing well.
Haruna does not irrigate them using the popular irrigation system.

He has improvised his own watering system by punching a series of holes in a jerry can, popularly known as ‘Kuffour gallon’.

The system has not only helped him to avoid the high cost associated with drip irrigation systems but also enabled him to grow food despite the erratic weather condition and fatigue.

“I have been farming for four years now and how to water the onions is our problem. Some of us don’t have machines to water them so we decided to get a can like this. We cut the mouth of the can so that we then use a pin, put it in fire and create the holes,” Haruna explained.

The small holes made on the gallons release water from the gallons in small gentle doses into the soil, penetrating to the roots of the plant to enable it flourish.

“It it too difficult because when you water the crops and go home, you experience general body pains.”

Haruna, who holds a diploma in Accounting, says some of his colleagues have to take painkillers and energy drinks to aid them.

“Because if you are not careful and after watering the crops, you can’t sleep at night. You’ll be tired then so we use quick action (a painkiller) and energy drinks before we then come to water.”

Haruna and others from him community have separate mini farm dugouts close to their farms for watering purposes. Although it is a daunting task, Haruna says it’s worth it.

“After the dry season farming, I make not less than 2000 cedis. Some will even get more than that because they use water pumping machines to water their vegetables.”

But because Haruna and others rely on their physical energy, they are unable to reap more than their colleagues.

“Definitely, I can’t compare myself to those using water pumping machines.”

It doesn’t cost them much to get it done. All they need is the jerry can and some time to create the holes.

Watara Zaara is also using the improvised irrigation system to grow onions.
Sometimes, Zaara harvests between seven and eight bags of onions at the end of the planting season.

“Last year, I harvested 8 bags. We sold one bag at 120 cedis. If you are lucky, you could get more profit.”

But the 30-year-old mother of three says watering her vegetables often wears her out because she has to go down into the dugouts all the time. The vegetable farmers are, therefore, turning to the improvised irrigation system to ensure sufficient water for their crops.

According to the farmers they are encouraged to use things that are readily available in their environment to produce food sustainably.
“As you can see, this is a very cumbersome process. My body hurts because I have to hold the two jerry cans, go to the dugout and fetch the water.”

Yesterday, When my brother, Fatau came, I told him I have been fetching the water from the dugout to water 40 beds a day.
Another farmer, Mohammed Seidu says, he has to water forty (40) beds of onions a day.

“I do same thing the next day untill the next three days and then I start all over again. I wish I could get a water pumping machine but I have no financial strength. I have to keep holding these two jerry cans everyday.”

Some farmers are beginning to reap handsome returns from the system, in spite of the changing climate. This has increased their income levels. However, some of the farmers still face challenges.

Rising temperature, declining rainfall and stormy weather are some of the climate factors that account for the reduction in the water resource base in most parts of northern Ghana.

Shortage in water supply has great impacts on people’s livelihood with a greater impact on women and children.

But Haruna and his colleagues hope the improvised irrigation system would keep them well above their past income and increase food production.

DISCLAIMER: The Views, Comments, Opinions, Contributions and Statements made by Readers and Contributors on this platform do not necessarily represent the views or policy of Multimedia Group Limited.
Tags:
Climate change
JoyNews
Ministry of Agriculture