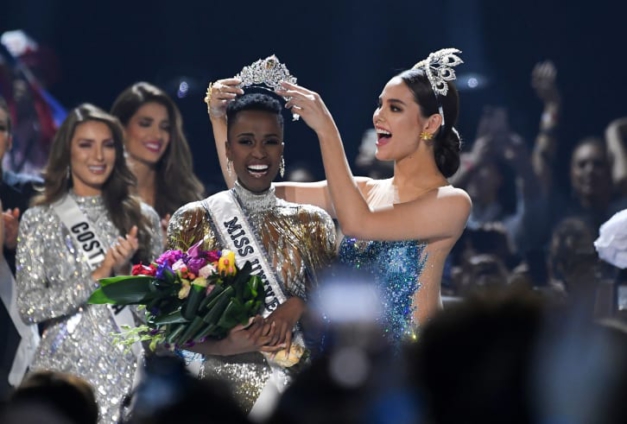 Zozibini Tunzi, a Black woman with afro hair, grew up reading fashion and beauty magazines that did not contain images of women who looked like her. So when she was crowned Miss South Africa one year ago, Tunzi felt on top of the world.

Four months after her national victory, she was actually on top of the world, at least by title — as 2019 Miss Universe, advancing over women from 89 countries in one of the most prestigious annual beauty pageants.

The 26-year-old became the third South African to accomplish the feat; but most notably, she became the first in the history of the pageant to win with afro-textured hair — an acknowledgment of Black beauty on the international stage.

With beauty contests historically dominated by lighter-skinned contestants, Tunzi said she didn’t know it was possible for someone like her to become Miss Universe.

Since then, Tunzi’s reign has unfolded unlike any other; a few months into her role, the coronavirus pandemic stymied any travel she would have done as part of her typical crown duties.

But from her New York apartment, she continues to advocate for gender equality and greater representation of Black women in the beauty realm.

Tunzi’s Miss Universe win was significant, set against the backdrop of centuries of under-representation for Black women in the beauty industry, according to Lori Tharps, professor, podcast host and co-author of “Hair Story: Untangling the Roots of Black Hair in America.”

Historically, she says, beauty standards were set by and for White women.

But it wasn’t just that White beauty standards were the “norm.” “There was a parallel campaign that kinky hair, dark skin, wide noses (and) more curvaceous features all signified something inferior,” Tharps explained in a phone interview.

In the US, public imagery — from ad campaigns to blackface — denigrated Black females, even into the 1960s and ’70s, she said. The deep roots of that inequality persist today.”

We are still in this place of struggle to acknowledge Black beauty, not in relation to Whiteness, but simply in and of itself.”

But with Miss Universe, Tharps added, “she’s beautiful because she’s beautiful, not because she looks like a White woman. She won being a darker-skinned African woman with undeniably African textured hair. So that is a remarkable feat.”

Leading up to her run as Miss South Africa, Tunzi courageously defied pressure to cover up her natural hair — and carried that through to Miss Universe.

The natural hair movement gained momentum in the early 2000s, according to Tharps, alongside a larger societal shift toward eco-friendly products and practices.

A 2019 report by market intelligence firm Mintel found that nearly eight in 10 Black consumers in the US now have chemically-free hair, and “prefer product collections made for their specific texture, hair issues and styling choices.”

I feel beautiful in my short, afro hair,” Tunzi said. “This is how it grows out of my head … and I wanted the world to see it like that.”

Not everyone saw it that way; Tunzi received comments on social media calling her a “downgrade,” and “underwhelming” after taking the Miss Universe title. She said that while it was hard to read those words, she knows that there are young girls and women across the globe who will look at her and feel represented.

A stepping stone for change

When that started happening, I was like, ‘Look world, it’s possible that you can have more than one Black woman at the table.’ It sort of dismantled that tokenism,” Tunzi said.

Tharps believes these wins signify progress during a period of global racial reckoning but cautions against overstating their significance.

“I hesitate to say that we have finally acknowledged that Black is beautiful, but in the symbolism that is a beauty pageant, they are a good barometer of where we are (as a) society in terms of what we are able to see as beautiful,” Tharps said.

While the women are excellent role models championing that message, she said widespread policies banning discrimination around natural hair — such as in the workplace and in schools — still need to be enacted to affect real change.

“(The pageant wins) are stepping stones towards the final win. When you put the stones together, you have a path to equality.”

DISCLAIMER: The Views, Comments, Opinions, Contributions and Statements made by Readers and Contributors on this platform do not necessarily represent the views or policy of Multimedia Group Limited.
Tags:
Beauty Pageants
Miss Universe
Zozibini Tunzi