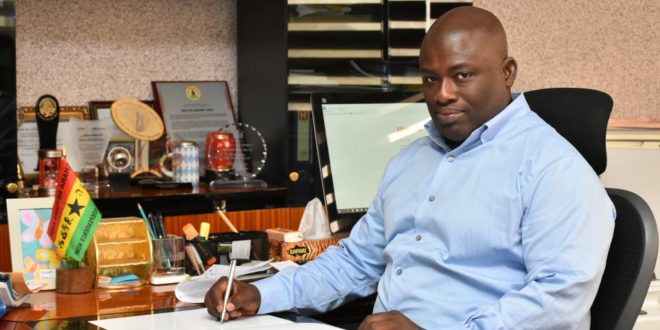 The Managing Director of the Tema Oil Refinery Asante Berko has been charged by the U.S Securities and Exchange Commission for arranging payments for the Ghana government and some legislators in 2015/2016.

Mr Berko’s move was to gain approval for a client’s power plant project, court documents from US prosecutors said.

The TOR boss’ role as a former executive of a United Kingdom-based financial services company (the “Subsidiary”) was to develop investment banking business for the Subsidiary and the Holding Company.

This included identifying and arranging financing, restructuring or merger transactions for clients, and assisting with the work necessary to
complete those transactions.

But Mr Berko in a release Tuesday that the SEC’s claims are “false.”

“I have had no contact with Members of Parliament nor officials of Parliament, regarding the approval of this transaction,” he wrote in the statement.

From approximately 2015 through at least 2016 (the “relevant period”), while employed at the Subsidiary, Berko schemed to bribe various government officials in the Republic of Ghana (“Ghana”) so that a client of the Subsidiary, a Turkish Energy Company (the “Energy Company”), would win a contract (the “Power Purchase Agreement”) to build and operate an electrical power plant in Ghana and sell the power to the Ghanaian government (the “Power Plant Project” or “Project”).

Berko crafted, developed and carried out the bribery scheme with the knowledge, or under circumstances that made it substantially certain, that all or a portion of the money paid to the Intermediary Company would be paid as bribes to Ghanaian government officials to secure support for the Power Plant Project. Berko and the Energy Company timed the largest transfers of funds to coincide with key milestones in the approval process of the Power Plant Project so that funds would be available to bribe the corrupt officials who were in positions to help accomplish those milestones. For example:

Berko also helped the Intermediary Company pay smaller bribes, totalling
approximately $210,000, to various other government officials involved in the Power Plant Project. These included bribes to a Ghanaian government official (“Government Official 2”) who assisted Government Official 1 on the Project, employees at the Ministry of Power who provided confidential information to the Intermediary Company concerning the Project,
government engineers who assessed the Energy Company’s technology, and officials at other government agencies who reviewed the Project.

In addition to the bribes paid through the Intermediary Company, Berko
personally paid bribes to advance the corrupt scheme. By August 2015, Berko had paid bribes of at least $66,000 to members of the Ghanaian parliament and other government officials in his effort to obtain approval for the Power Plant Project.

Berko sought to profit from the bribery scheme in two ways. First, he knew the Subsidiary would earn over $10 million in fees if the Energy Company secured the Power Plant Project and the Subsidiary organized financing for it, which in turn would enhance Berko’s performance and stature within the Subsidiary.

Second, by at least July 2015, Berko understood that the Energy Company would secretly compensate him for arranging the bribe scheme. Unbeknownst to the Subsidiary – and in violation of Berko’s employment agreement with the Subsidiary – between September 2016 and February 2017, the Energy Company paid Berko $2 million for successfully coordinating the bribery scheme.

Berko took deliberate measures to prevent the Holding Company’s and the
Subsidiary’s compliance personnel from discovering his corrupt scheme. First, Berko used his personal email rather than his work email to arrange the bribery scheme in order to evade detection. Berko knew that Subsidiary and/or Holding Company compliance personnel could review his work email as part of their periodic and/or project-related due diligence.

Second, Berko intentionally failed to correct a critical document – directed to the Holding Company –that falsely stated that the Energy Company had not compensated any intermediaries or politically exposed persons in connection with the Power Plant Project.

Despite Berko’s efforts to conceal his misconduct, the Holding Company required additional due diligence to further assess the potential reputational risks associated with the Project and to address other concerns. As part of this diligence, during March 2016, compliance personnel at the Subsidiary reviewed Berko’s emails and discovered the involvement of the. Intermediary Company.

The Energy Company’s executives provided incomplete and inaccurate information to the Subsidiary personnel’s questions and failed to disclose that the Intermediary Company’s true purpose was to facilitate the bribery
scheme. When Subsidiary personnel continued to probe the role of the Intermediary Company in the transaction, the Energy Company’s executives refused to answer any more questions on the topic.

As a result of information obtained during this further investigation, by August 2016, the Subsidiary terminated its involvement in the Project. Between September 2016 and February 2017, the Energy Company paid Berko $2 million for his effort in facilitating the bribery scheme.

On or about December 7, 2016, Berko tendered his resignation to the Subsidiary, which became final on or about March 6, 2017. Following his departure from the Subsidiary, Berko began providing consulting services for the Energy Company.