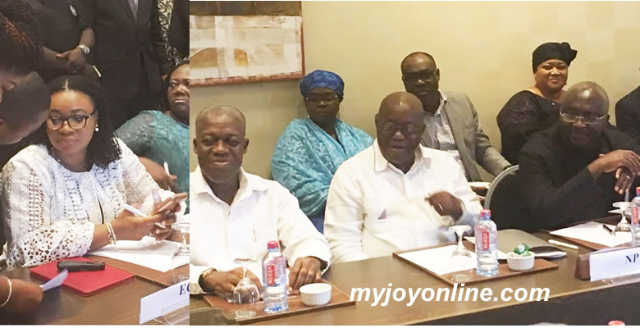 The National Peace Council has called for a more robust electoral system that can win the confidence of political stakeholders.

He said the many pro-peace activities, slogans and fanfare have been prevalent because doubts still remain about Ghana's electoral process.

He was speaking at a high-powered meeting between the Electoral Commission and six presidential candidates including President John Mahama.

The meeting held at the Movenpick Ambassador Hotel in Accra Thursday is organised by the Commonwealth Observer Mission led by former South African president Thabo Mbeki.

Like a Peace Summit was held in 2012 ahead of the general elections, another peace-inspired conference of presidential candidates in the 2016 elections had been held.

The Chairman of the National Peace Council delivering his address signalled, the council is fatigued by the peace pledges. "Let this peace pledges be the last", he stressed.

He was not alone in his concern. The recently-elected President of the National House of Chiefs Togbe Afede XIV told the politicians gathered there, "four years from now we will not have reason to be invited here again"

He said political contest is a declaration of an honest desire to serve and wondered why it must be filled with acrimony and tensions. If disruptive emotions characterise elections, then it shows the actors have a selfish desire to use power for their own advantage.

The 2016 general elections is expected to be a close fought battle between the governing NDC and main opposition NPP.

A win for NPP's Nana Akufo-Addo will end two consecutive defeats and make him Ghana's oldest President at 72 years. A loss for John Mahama will make him a record one-term president.

After the 2012 presidential results ended in court in 2013, the Supreme Court gave a judgment that has sent signals to political parties that elections are won at the polling stations and not in court.

The NPP and the NDC are therefore poised to monitor the ballot with a sense of heightened vigilance which has increased the tension..