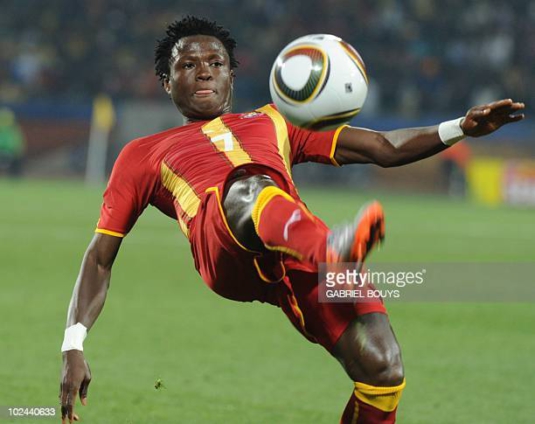 Ghana's defender Samuel Inkoom kicks the ball during the 2010 World Cup round of 16 football match USA vs. Ghana on June 26, 2010 at Royal Bafokeng stadium in Rustenburg. NO PUSH TO MOBILE / MOBILE USE SOLELY WITHIN EDITORIAL ARTICLE - AFP PHOTO / GABRIEL BOUYS (Photo credit should read GABRIEL BOUYS/AFP via Getty Images)

He won the U-20 FIFA World Cup and appeared at two FIFA World cup tournaments for his country Ghana, and at age 31 he is filled with so much verve to continue the journey in his club career.

Last week, Samuel Inkoom signed for Torpedo Kutaisi, a second Georgian club in two years and is hopeful he can make a massive impact and win trophies.

“Torpedo is one of the best traditional clubs in Georgia. The club has good coaching staff and good facilities as well as a good playing body. I have been to so many countries in terms of football. I am also here to bring my experience to bear having played in the World Cup the UEFA Champions League and every stage that a player needs to play on,” he told Joy Sports.

Inkoom was outdoored last Thursday and featured for 10 minutes in the game against Dinamo Batumi which his side lost 0-1.

Torpedo are four-time winners of the Erovnuli Liga (the Georgian top-flight), annexed the Georgian Cup four times and the Super Cup twice. They wrapped up the last season in eighth place.

“I want to bring my experience to bear because I have gained a lot of it playing all these years. The league is my target. This is a great club which can be likened to Hearts of Oak or Kotoko in Ghana. So I am targeting the league title. I know how the game goes here in Georgia and I want the best,” he told Joy Sports.

The right back’s arrival according to him, is a necessity especially as such purchases are made in the January window.

“Torpedo had already done their pre-season and had their plans but I believe that my arrival was very key. Purchases made during the January window are necessities and I am ready to add to the efforts here.”

Inkoom’s journey to global relevance started when he played in Ghana’s trophy winning campaign at the 2009 Under 20 Nations Cup in Rwanda and went ahead to win the FIFA World Cup in Egypt – a first for Ghana and Africa.

Inkoom was also part of a crop of underrated youthful players who made it to the final of the Africa Cup of Nations final in Angola, losing by a goal to Egypt.

He has since earned 46 caps for the Back Stars of Ghana.

“I do miss playing for Ghana. I have done a lot with my country it’s always great to serve. I am still doing my best and playing and I will love any opportunity to do it again,” he said.

DISCLAIMER: The Views, Comments, Opinions, Contributions and Statements made by Readers and Contributors on this platform do not necessarily represent the views or policy of Multimedia Group Limited.
Tags:
Black Stars
Georgia
Samuel Inkoom
Torpedo Kutaisi