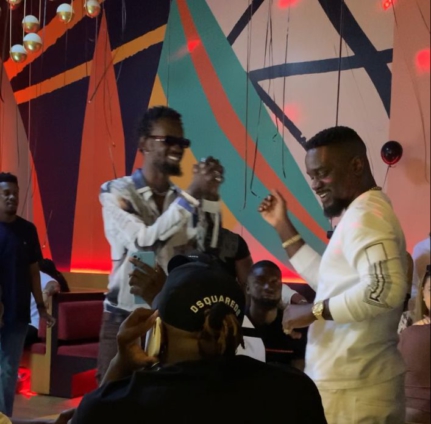 The VGMA artiste of the decade recalls a brief stay in South Africa where he was scheduled to shoot a music video.

According to him, there was an occasion when partygoers at a club were eager to hear a joint for the Konongo-based musician.

🔥Sarkodie recalls how partygoers in a South African🇿🇦club were looking to @blacksherif_’s record as the biggest of the night. @Sarkodie also showers praise on #TheVillainINeverWas album. pic.twitter.com/ksjpWlSfTg

Speaking at Black Sherif’s private cocktail to celebrate his debut album, Sarkodie explained that a club he visited in South Africa had Blacko’s music as one of the Number 1 records.

“It’s not just part of the playlist. We’re talking about the biggest song of the night that people are looking forward to at the highest peak,” he told the gathering.

The ‘No Pressure’ crooner expressed his pride in what the 20-year-old has achieved adding that Blacko should brace himself for more successes in the future.

“He is about to see more than he has done already. So he should strap on for the better things that are about to happen,” Sarkodie added.

Every time @blacksherif_ links up with the Landlord @sarkodie💫.

The album has already garnered 100 million plays on the music streaming service, Boomplay and made impressive waves on charts locally and internationally.

Mohammed Ismail Sherif Kwaku Frimpong, as he is known outside music circles, released his debut album on October 6, 2022.

He has been lauded for the 14-track project which had no features except for his already released Second Sermon Remix which had mentor and collaborator, Burna Boy on it.

DISCLAIMER: The Views, Comments, Opinions, Contributions and Statements made by Readers and Contributors on this platform do not necessarily represent the views or policy of Multimedia Group Limited.
Tags:
Black Sherif
Sarkodie
South Africa