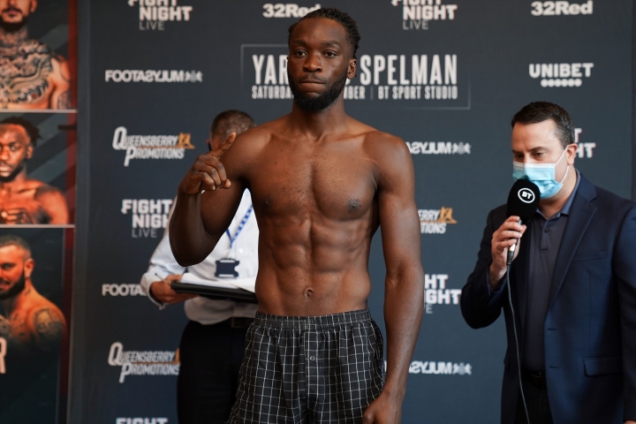 Ghanaian born, British middleweight champion, Denzel Bentley, also known as, Denzel Ntim Mensah is craving for the opportunity to fight in Ghana as he works his way to the top.

Bentley, who is undefeated in 14 bouts became the new British middleweight champion last month after his opponent Mark Heffron retired in the fourth round of the scheduled 12 rounder.

Bentley, nicknamed Too Sharp, had fought Heffron three months earlier but it ended in a draw.

“This will also inspire the up and coming boxers who feature on the undercards to achieve great things. Definitely, I want to go all the way to the top and when I win my world title I’d love to defend it right here in Ghana,” he told Joy Sports’ Nathaniel Attoh in an interview.

Denzel Bentley started his professional career in 2017 against journeyman Casey Blair and immediately recorded a chain of four knockout wins. The hard-hitting middleweight boxer subsequently found his way around all other opponents who followed after those four wins and is yet to taste defeat.

According to him, the second bout against Heffron which won him the title turned out the easiest fight of his career so far.

“We had a controversial draw in the first fight. There was a lot of talk about how it was a fight too early for me and how he [Heffron] was a big puncher. I felt I was ready but all these things can get into your head. I was moving around a lot more and jabbing but they were not stiff enough. I was just tapping it and moving around.

In the second fight, I held my ground a lot more. There was a lot more venom in the shots I was hitting him with in the second round,”

Denzel Bentley started playing football in his formative years in the UK but had the turning point when his elder brother brought home a set of gloves and head guards.

He and his friends would get together and oblivious of the technique, and just wear the gear and fight. But the Ghanaian boxer made a new friend in high school who was a boxer. Through the latter, he entered a gym for the first time at age 17.

“It was intimidating at first because the coaches always wanted boxers who were already conversant with the technique so it would be easier for them to teach. So at the initial stage, I wasn’t regular at the gym but with time I made some friends in there and I got used to it”

Bentley a.k.a. Too Sharp turned pro after only 17 amateur fights and aims at going all the way to the top. He, however, admitted that he is only starting the journey. “I look forward to some more fights and bigger opponents including former world champions and highly-rated contenders.”

Denzel Bentley (Denzel Ntim Mensah) is expected to return to action in April next year. For now, he is spending time with family in Ghana and visiting key personalities.

He had the privilege of being hosted by the Asantehene, Otumfuor Osei Tutu II, King of the Ashanti Kingdom at his Manhyia Palace.

“It was such a great privilege that someone of such importance gave me recondition. There is so much culture and history and I am glad to have had that encounter,” he told Joy Sports.

DISCLAIMER: The Views, Comments, Opinions, Contributions and Statements made by Readers and Contributors on this platform do not necessarily represent the views or policy of Multimedia Group Limited.
Tags:
British Boxer
Denzel Bentley
Joy Sports