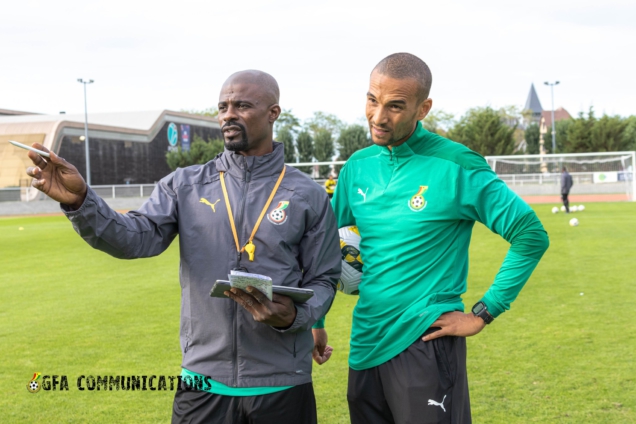 George Boateng ahead of Brazil game

Assistant coach of the Black Stars, George Boateng, has revealed he was not forced to step down from his role as Aston Villa U-23 boss as part of taking his new role with the national team.

The 46-year-old announced his decision to quit working with the Premier League side last month citing the need to concentrate on his role with Ghana as the reason behind it.

The former Villa player worked on a temporary basis prior to Ghana’s qualification to the FIFA 2022 World Cup and did the same during the summer period when the team travelled to Japan for the Kirin Cup.

However, Boateng decided to quit his role with Villa and focus solely on the Black Stars with the World Cup fast approaching.

“I was adamant that I want to do the job with Ghana. I wanted and felt it is the right decision to stay with Ghana and help. Then you come to the conclusion that both jobs are full-time and both jobs demand a lot of time and being the person that I am, I don’t like to lack in any department of what I do and what I undertake,” he added.

According to him, choosing Ghana over the Villa job is going to be the best decision in the long term.

“To be fully committed I had to make a decision and when I look at the overall picture, to me, it was the best decision for the club because when I am away every time on international duty, especially [knowing] the World Cup could be anything from three to six weeks,” he noted.

“And to be away from the role that I am doing, the club said that it is almost impossible because I will be missed and it’s not like you can replace somebody who knows the curriculum, who knows the programme, and more importantly, who has been working with the players for the last three seasons.

“Then we both decided that it was best for me to resign from one of my duties which will be the AV one and prolong my career with Ghana going forward.”

Boateng is currently in camp with the Black Stars, who will playing Brazil in France on Friday, September 23.