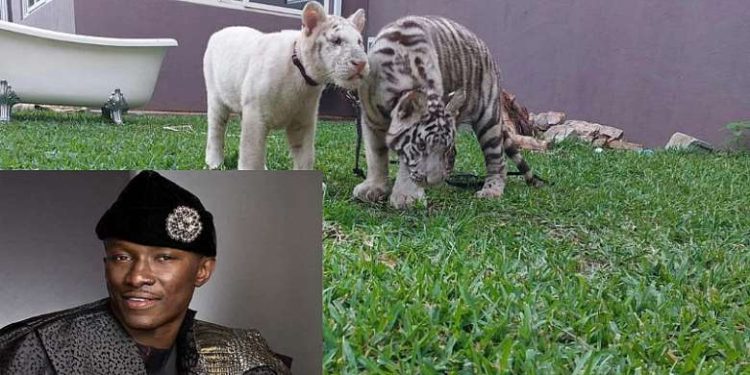 Businessman, Freedom Jacob Caesar, also known as Cheddar, has defended his decision to import two tigers into the country.

According to him, he went through the proper procedures to acquire the animals.

“First of all, it is right; I have two tigers that I bought on a bid between Ghana and Dubai. I was the representative from the private sector that initiated my interest in purchasing these two animals. But we did go through the process; the animals are seven months old, still at a very young stage”, he said.

He also revealed that, he bought the tigers to help boost tourism in the country.

“I went in to buy these animals, to add to the value of tourism in our country. I wanted to go into the Safari World by making sure that Ghana becomes the first country in West Africa, East Africa, and Central Africa, except for South Africa that has these animals”, he explained.

He added that “I really consider the dangerous side, but I am not here to harm people and I am not here to encourage people to have tigers to harm people. I am here because I want to boost our tourism. I want to add value to our country. I have invested in these animals and it cost me over 100,000 to be able to get them to these levels, and we are willing to invest more until they are safe so that people can visit them and be a part of them.

He said that he has been keeping the tigers with him for six months, stating that the two animals are a male and a female and that each of them is six months old.

Freedom Jacob Caesar further intimated that he “brought experts from outside to create a safety cage for these animals so they don’t become dangerous to the public”.

But the presence of the two tigers in his house at Wonda World Estates, near the British High Commission at Ridge in Accra, has displeased several residents.

“The animals stink. Those animals are held inside an apartment with no access to proper fresh air. As soon as the door is open, you sniff a strong unpleasant smell emanating from there”, a resident said.

Another also lamented that, “they are opened early in the morning and then sent inside around 10 am. They pee and poo on the floor. They also make noise which disturbs our sleep”.

Meanwhile, the Ghana Police Service has said that, it is taking steps to remove the tigers from the private residence in Accra.

According to the Police, their action follows the complaints from residents of the area.

“The Accra Regional Command on Thursday, May 19, 2022, received a complaint that some tigers were being kept in a residential neighbourhood in Accra”.

The law enforcement agency made this known in a press statement issued on Thursday.