‘I woke up and realised I was getting taller’ – Awuche 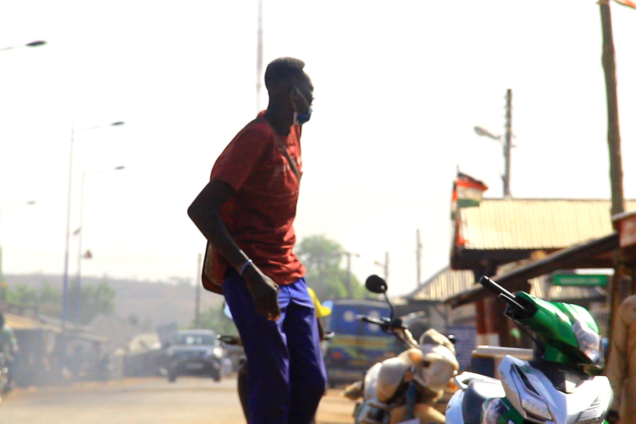 Whenever, in the past, Suleman Abdul-Samed took to the streets of Gambaga, he was met with public discussion and continued glances at his height.

Even now, visitors spend time, in turn, to watch him, in a surprise manner. Those who have the opportunity take pictures with him to show the world just how tall and gigantic he is.

But Sulemana wasn’t born tall. He woke up one day and realized he was getting taller and his foot was getting much bigger than the size of his shoes.

“People said I was getting taller and I was like, how come?” he said. There was some kind of attention paid to his height and people wanted to know what could have happened to him.

But Suleman alias Awuche always gave a friendly smile to enjoy their appreciation for him.

The 27-year old currently measures 7 feet. He dominates all Northeastern men, women and claims to be the tallest in the northern part of the country.

Awuche is proud of his height because it earns him a place everywhere he goes. He is only 1.3 foot from the world’s tallest man, Sultan Kösen from Turkey, who is 8.3 feet away. That is what makes Awuche so enthusiastic about his height.

“There was man in Diare who said he was taller than me, so I went to challenge him,” he said.

“When I went, he was at my waist level” Awuche laughed.

Amazingly, Awuche knows his height is unusual. “I know I am not well,” he adds.

When Awuche was 21, he was taken to a pharmacy in Accra for medication but that never yielded any positive results.

The chemists were amazed by his height. Unfortunately, Awuche is unable to recall what the pharmacist said about his condition.

“It has been long. I can’t remember but I know I am not feeling well.”

Awuche’s Mother, Sulemana Ayishetu, wasn’t tall and his father too, Salifu Sulemana. Both passed on in 2015 and 2019 respectively.

He has three elder brothers and a late sister. They are not tall. And that’s what has also become public discussion.

Many people want to know where he got his tall. But Awuche says a doctor at Baptist Medical Centre in Nalerigu in the North-East Region once told him he is suffering from gigantism.

Awuche is thought to have been spiritually harmed because none of his siblings are like him.

That belief existed in the minds of many people, including his family.

The same claim was made at the time of our interview.

“Even though, natural things exist, but there are other things we can use to curtail the situation.” A neighbor, Abdulai Halim explained.

Awuche, according to a General Surgery Specialist at the Tamale Teaching Hospital, has an underlying ailment called Acromegaly and may have experienced Gigantism as a child, which explains his tall stature.

High levels of growth hormone, if left untreated, can harm the bones as well as other parts of the body. This can result in serious, even life-threatening health issues. However, treatment can lower the chance of problems and considerably improve patients symptoms, including facial enlargement.

Acromegaly can also lead to gradual changes in the form of face, such as a protruding lower jaw and brow bone, an expanded nose, thickening lips, and wider tooth spacing.

Awuche also has a chronic leg ulcer, according to Dr. Sheriff, which has to be treated.

Now, he has abandoned all his shoes and sandals he used to comfortably wear. He has to walk to someone to measure his size before he could have his own sandal made for him.

Being super-tall comes with its own challenges, of having to squeeze yourself into cars, and climbing to form romantic relationships.

Since Awuche returned from Accra for his mum funeral six years ago, he has barely gotten into a car. He does so under a very difficult condition.

He primarily rides his motorbike to surrounding communities. When you see Awuche on his motorbike, you will be amazed – as you will see in the attached video.

Beyond his daily task, the 27-year-old was once a public figure in Gambaga. He was named after one time Liverpool striker, Peter Crouch.

“People used to hire me to play for them,” he told JoyNews.

Awuche was a winger who was admired for his selfless love for the local team in Gambaga.

In his absence, a match against his team’s opponents won’t come off. His presence was almost always like Messi at Barcelona.

“I used to sing for my team just to inspire them,”

Awuche does more than his MoMo business. He is also into politics. He has “Pragia” that was bought for him by his mentor, Vice President Dr Bawumia.

Awuche says he approached the Vice President at one of his visits in Gambaga and made the demand.

“The Vice President asked if I could use it and I said yes, I will let someone operate it for me.”

Amazingly, the vice president whom Awuche always refers to as Ghana number 2 gave him 15 thousand cedis to buy the pragia.

Awuche used 8 thousand for the pragia and invested the remaining money into his MoMO BUSINESS.

Initially, he didn’t even have 200 cedis to cash out for people but now he can boast of more than 5 thousand in his wallet.

“My signboard is now Dr. Bawumia and nobody can question me… Very soon, people will start calling me Dr. BAWUMIA and I will be laughing.”

But Awuche is unhappy his parents aren’t alive to see what Dr. Bawumia had done for him.

And what is Awuche’s experience with ladies? One of his elder brothers, Sani Sulemana believes, a wife may help him overcome his challenges.

“If he has a wife, maybe she will always console him when he is sad.”

JoyNews team had wanted to go into his bedroom to look at how his bed is but did not get the opportunity.

Despite the slight pain he experiences time to time, Awuche has embraced his unique condition.

But there might be some who claim to be taller than Awuche, he wants them to stand up and be counted.

His determination to overcome life’s challenges is widely admired.

Does the tallest man have any regrets? Yes, his condition. He is not happy about it. That’s why he has a request from the public.

“I need support from the general public so that I can get good doctor to take care of me,” he says.

According to Awuche, he still needs the support of Vice President, Dr Bawumia to undergo medical treatment.

His brother, Sani, wishes, the family could get few days treatment for Awuche. He believes that could turn the 27- old man’s life around.

Sulemana completed Al-Saadi Senior High School in the Northern Region back in 2013.

He did General arts and dreamed of becoming a Journalist, but things didn’t go well for him.

DISCLAIMER: The Views, Comments, Opinions, Contributions and Statements made by Readers and Contributors on this platform do not necessarily represent the views or policy of Multimedia Group Limited.
Tags:
Awuche
Ghana
Suleman Abdul-Samed
Tallest man