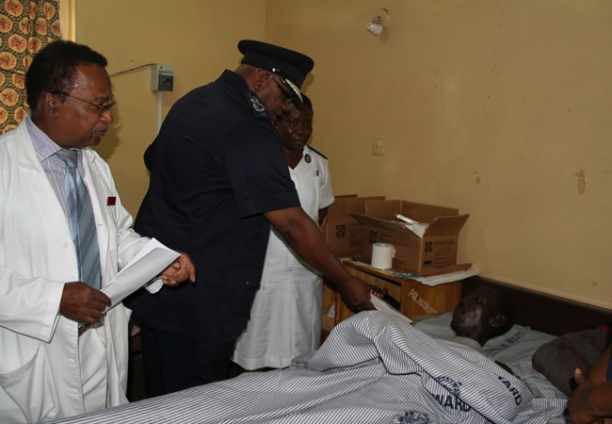 The Inspector-General of Police, Mr. Mohammed Ahmed Alhassan has underscored the significance of the social services the Ghana Police Service renders to the general public, referring specifically to the Police Hospital, DOVVSU and other such units.

The IGP said this when he and the Police Management Board members paid a visit to the Police Hospital on Tuesday 31st December 2013. He visited Police Officers who were on admission, to give them the support and the recognition of the Police Administration.

While interacting with the patients, Mr. Alhassan said “we always remember those of you in hospital, and even those serving outside the country”. Most of the patients confessed to the IGP and his entourage that they were being taken very good care of by the medical officers of the Police medical facility.

The IGP also took the opportunity to express his Administration’s heartfelt appreciation to the management and staff of the hospital, adding light-heartedly that “as you are here doing your best to save lives, we are also out there chasing armed robbers”. He also commended Cuban doctors who are serving in the Police Hospital and other health facilities for their selflessness.

The Police Chief presented the Police officers on admission with Christmas Cards and a token. The Police Administration also presented assorted items including tins of milk and milo; boxes of lipton and pasta, bags of rice, bottles of oil, and a ram to patients on admission.

On his part, the Director of Medical Services of the hospital, Brig.Gen/Dr. Wadhwani [Rtd] thanked the Police Administration for the visit and said that it would boost the morale of the staff of the hospital.

All members of the POMAB accompanied the IGP on the visit.