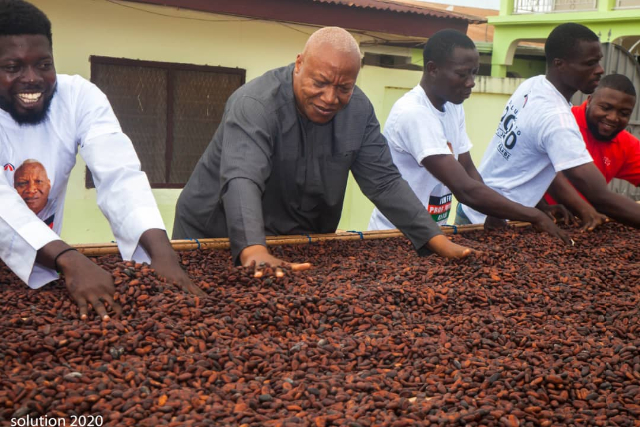 Presidential hopeful of the National Democratic Congress (NDC), has promised cocoa farmers in the country that his government will pay the highest producer price in the world, if he is elected President.

The former University for Professional Studies Vice Chancellor who is seeking to be President, chided the Nana Akufo-Addo government for reneging on their promises made to cocoa farmers. He sympathised with cocoa farmers in the region, following the refusal of the government to increase the producer price of cocoa, for the past two years.

"I am a son of a farmer. I grew up in the farm. I worked in the farm. That was our source of income, as a family. So, if buyers are paying unattractive prices for our crops, it hurts. It throws our budget out of gear and destabilises the family. This is why I am asking that the government reconsiders it's decision," He explained.

Prof Alabi on Tuesday interacted with a number of cocoa farmers in Juaboso, Bodi and Akotombra in the Western Region, to encourage them to hold on to their profession and expect the best times as cocoa farmers from 2021 when he assumes the reins of government.

He was confident that He will win the NDC flagbearership race and form the next government, to replace the governing New Patriotic Party (NPP) regime which he described as under-performing.

The Professor recognised that farming is the chosen profession of the cocoa farmers and therefore, they deserve to be given appropriate compensation for their labour.  "The sweetness of labour is wages. So, those sitting in Accra and determining how we should live should first tell us if they have not received salary increment since 2016," he charged.

In furtherance to that he quizzed: "How many of our Ghanaian professionals working for government can afford two years of no salary increment? None. No public servant or civil servant will accept to work tirelessly for two years without an increase in the salary."

Professor Alabi condemned the situation where those living on the sweat of the cocoa farmers are enjoying luxury lives at the expense of the hard working farmers.

In response to another concern of the farmers, Prof Joshua Alabi promised to use the shortest possible time to construct all the roads in the cocoa growing areas, so as to bring relief to farmers in the area.