I'm gay, fear forced me to deny it - Ghanaian journalist comes out on live TV - MyJoyOnline.com

I’m gay, fear forced me to deny it – Ghanaian journalist comes out on live TV 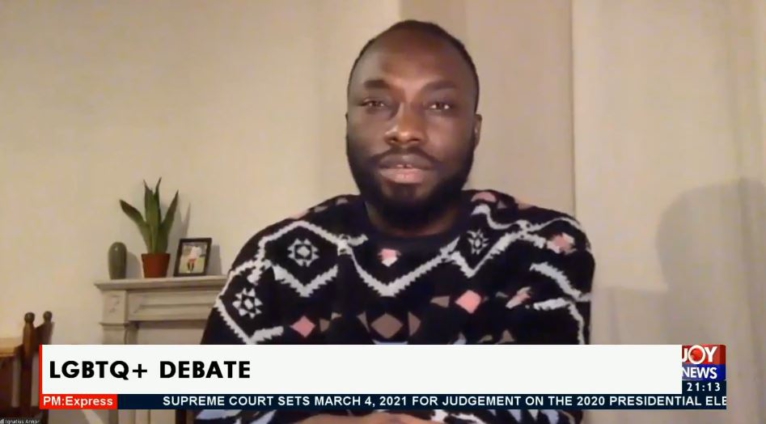 A Ghanaian journalist and LGBTQI+ activist has for the very first time openly declared he is gay.

According to Ignatius Annor, he had kept his alignment to the community a secret for fear of losing his job and the stigma that it could generate.

“This is going to be the very first time that I am using your medium to say that not only am I an activist for the rights of Africa’s sexual minorities, what you will call the LGBTQI community, but I am gay.

“Obviously, I denied it because I was afraid of losing my job, I was working at an incredible Television station in Accra and also for the fear of what would happen to me personally,” Mr Annor said on JoyNews via Zoom.

Speaking on PM: Express Monday, the pro LGBTQI+ activist said members of his community are unhappy “because you are not allowed to openly say who you are.”

“What my community is asking for is the opportunity love like all humanity loves, particularly in the case of Ghana heterosexuals,” he told Ayisha Ibrahim.

There has been widespread debate following the opening of an Accra office by the group in Ghana.

It has since triggered the resurfacing of concerns over activities of the community with calls from a cross-section of Ghanaians including the Proper Human Sexual Rights and Family Values and the Ghana Pentecostal and Charismatic Council (GPCC) to have the group’s activities stopped.

But according to Mr Annor, that would be a breach of their human rights.

“It doesn’t feel like I am a human being who deserves the right to employment, the right to education, and normally the basic rights to be able to walk, drive around to wherever that I want to go to in Ghana as an openly gay man. It doesn’t feel okay, it feels dehumanised and awful.”

The journalist who is currently with Euronews English, sharing his story on the show said he was pained as he returned to Ghana only to be denied job opportunities over the suspicion about his sexuality “and that’s just because of the stigma that surrounds my community.”

Although his mother in January 2017, mentioned that such community is “demonic”, the activist believes his mother’s stand was because of “what has repeatedly been fed into the mind and ultimately the hearts of people.”

Information Minister-Designate, Kojo Oppong Nkrumah had indicated there is a need for the country to consider passing a law that tackles the promotion of such a group as the practice is culturally unacceptable and contrary to section 104 of the Criminal Code, 1960.

But Mr Annor hopes “those laws [that exists currently] could be scrap out of the books of the Republic of Ghana so that people like myself who have life, who work, and contribute to the socio-economic fibre of Republic of Ghana can be accepted as human beings deserving of respect, kindness and dignity.”