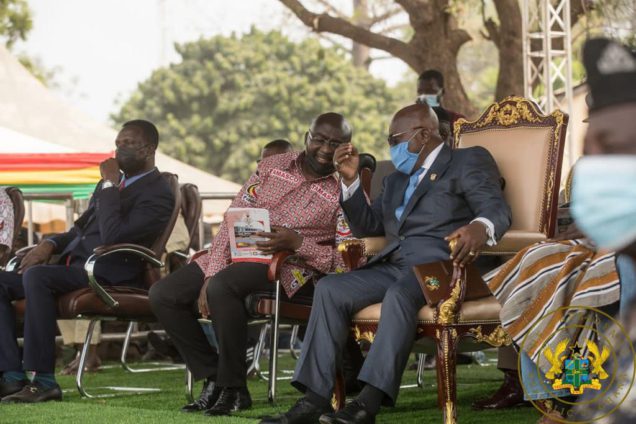 President Nana Akufo-Addo, has expressed utmost satisfaction with the Free Senior High School (SHS) policy, introduced by his administration in September 2017, that is currently guaranteeing a minimum of senior high school education for all of Ghana’s children.

According to President Akufo-Addo, “five years on following the implementation of the Free SHS programme, which has guaranteed a minimum of SHS education for 1.6 million students, I want to state, without any equivocation, that I am very proud of the policy and of its results thus far.”

Speaking at the 70th anniversary celebration of the Tamale Senior High School (TAMASCO) in Tamale, on Saturday, 11th December 2021, the President stressed that the experiences of developed nations have shown that the most efficient way to create a society of opportunities, and, thereby, guarantee the future of a nation, is by investing in education and skills training of the youth.

Without an educated populace, he stated that, Ghana cannot transition from the status of a developing to a developed nation, adding that “it is the people of Ghana, Ghanaians like you and I, and especially the youth of today, who are going to build Ghana.”

The results of the 2020 and 2021 WASSCE results, the President stated, give further evidence of why the Free SHS policy has been a success so far.

“There were some who described Free SHS as “a waste”; some said it would “destroy our Ivy League Schools”, and some indicated that the policy was going to compromise the quality of senior high school education. None of these have happened, and I am sure they have eggs on their faces now, or should have,” Akufo-Addo stated.

“Lest we forget, the 2021 batch of students were the pioneers of the double track system, which elicited a lot of vilification and unfounded criticism on its introduction.”

Another indication of the value of the Free SHS policy, he stated, is the dramatic increase in the percentage of students from TAMASCO, who have qualified to attend University.

The President, thus, appealed to all Ghanaians to “forgo partisan, parochial considerations, which confer little benefit, and all agree that Free SHS has to be a part of our national educational architecture, for, at least, a generation, if not forever. Our nation will clearly be empowered and enriched”.

Commitment to Education Reinforcing Government’s commitment to ensuring the provision of quality, relevant education, President Akufo-Addo told the gathering that Government has introduced the teacher licensure regime aimed at professionalising teaching, and bringing it in line with international best practices.

Thus far, the National Teaching Council has issued some one hundred and twenty-nine thousand (129,000) licenses to teachers.

Government, he added, has commenced the construction of twenty (20) Science, Technology, Engineering and Mathematics (STEM) centres across the country, with all twenty (20) at various stages of completion.

Additionally, out of the one thousand, one hundred and nineteen (1,119) projects, being constructed under the Free Senior High School Infrastructure Intervention, six hundred and fifty-seven (657) have been completed, with some two thousand, seven hundred and eighteen (2,718) vehicles procured and distributed by the Ghana Education Service to various institutions across the country.

With the completion of nine (9) Model Senior High Schools across the country being imminent, President Akufo-Addo told the gathering that “in 2022, Government will expand the Free SHS Programme to cover all first-year students in public TVET Institutes.”

He assured further that Government will continue with the programme of implementing the various reforms and projects in the TVET sector, including the rehabilitation and upgrading of technical universities, upgrading and modernisation of the thirty-four (34) NVTI centres, retooling of TVET Institutes, and the establishment of ten (10) state-of-the-art TVET institutes.